We woke up early today with more of a focus on getting up and out.  Today was going to be a long ride day.  We planned on riding to the Race Track playa, where the rocks slide across the sand.  And after that, Lippincott Canyon, for those who dared.  On the way we would see Ubehebe Crater, Tea Kettle Junction, Saline Valley and the Joshua Tree forest.  I was ready! Here we go!

Me, getting the bike ready for the journey

Scotty’s Castle is also on the way to the Racetrack, but the road up is closed this year due to the incredible amount of rain they got.  First stop, about 60 miles up on asphalt was Ubehebe Crater.

This is fairly new, in comparison to other Death Valley formations.  Only a few hundred years ago, a massive volcanic explosion happened when an underground spring collided with hot magma.  After the dust settled, this 600 foot deep crater remained.  You can hike down to the very bottom if you’re feeling sassy.  Remember, you have to come back up.

Taking a step back (photo courtesy of toddshikingguide.com)

The 27 mile dirt road to Race Track is just before the crater, so that was our next leg of the trip.  This was a fairly easy road to ride down but harder in a vehicle due to the constant washboards.  21 miles later, at about 4,000 feet elevation, we arrived at Tea Kettle Junction for a rest.

The DR (affectionately known as Tigger) taking a rest.

Tea Kettle Junction is one of those odd cultural sites in the desert.  No one really knows the history of this, but it is said that early settlers put tea kettles here to show others that water was near.  However, as far as I know, there is no sight of water around for miles.  People put messages on their tea kettles or write them in paper and put the message inside for others to read.  The park has to clear these out every so often to make way for the new tea kettles. 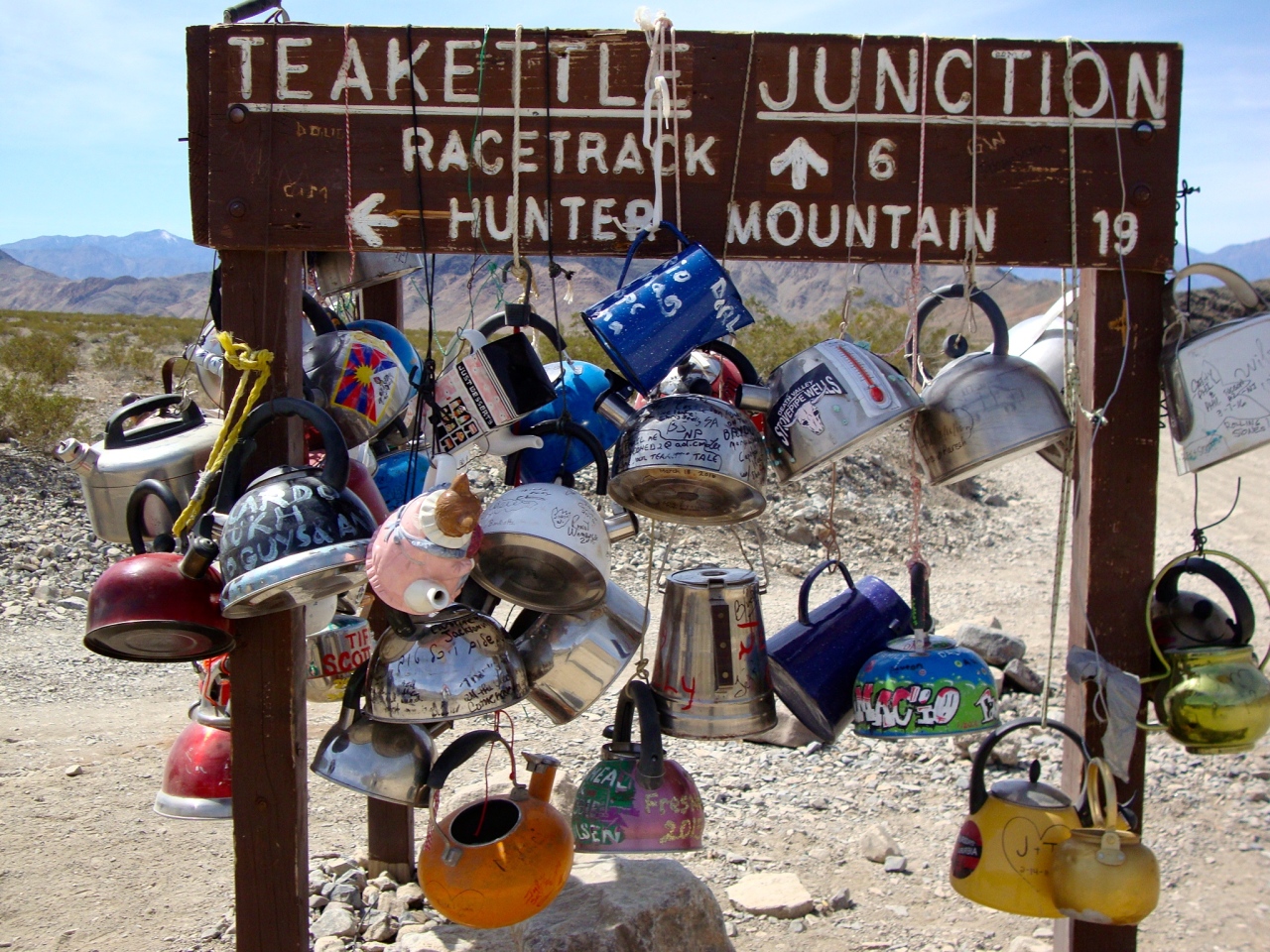 I think I spot a Le Crueset

While there we met a gal and her dog from Wisconsin driving a pick up and hauling a 4×4 Teardrop trailer.  She was coming down from Hunter Mountain and lost a wiring harness on her trailer.  We helped her look for it but with no success.  I thought it was pretty cool she was out on such an adventure, taking a trailer on some of these roads.

Onward to the Race Track Playa!  Just six miles up the road, we stopped to explore and have lunch. 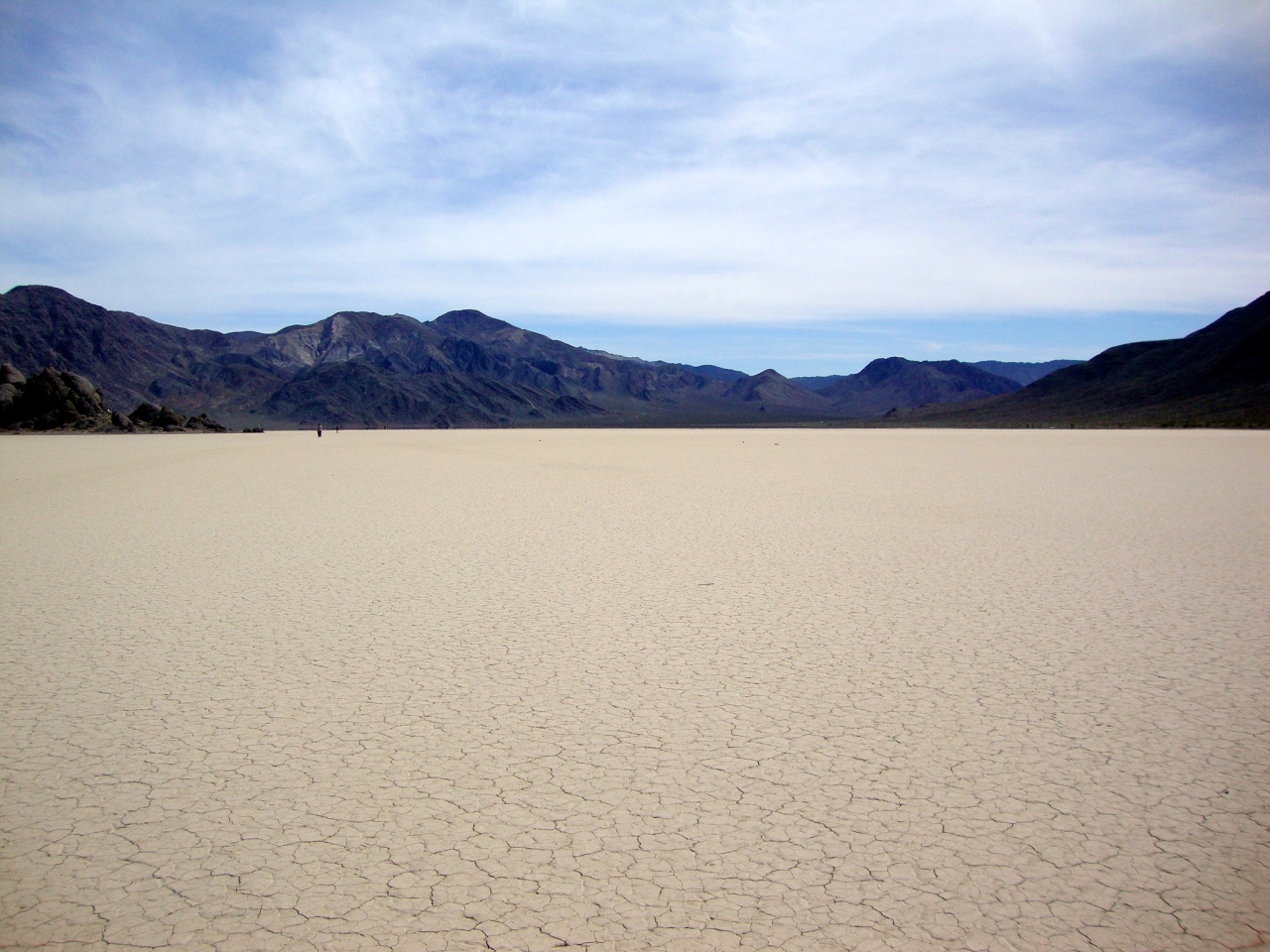 This is where rocks have mysteriously glided across the dry lake bed, leaving long tracks.  For years people made up wild stories on how it happens.  Aliens?  Not so much.  The scientific explanation:  In the colder months, condensation can form on the playa and freeze at night, making it an ice rink for the rocks.  The high winds can push these rocks across the ice.  In the morning, it melts and the rocks are left in the playa with their tracks behind them. 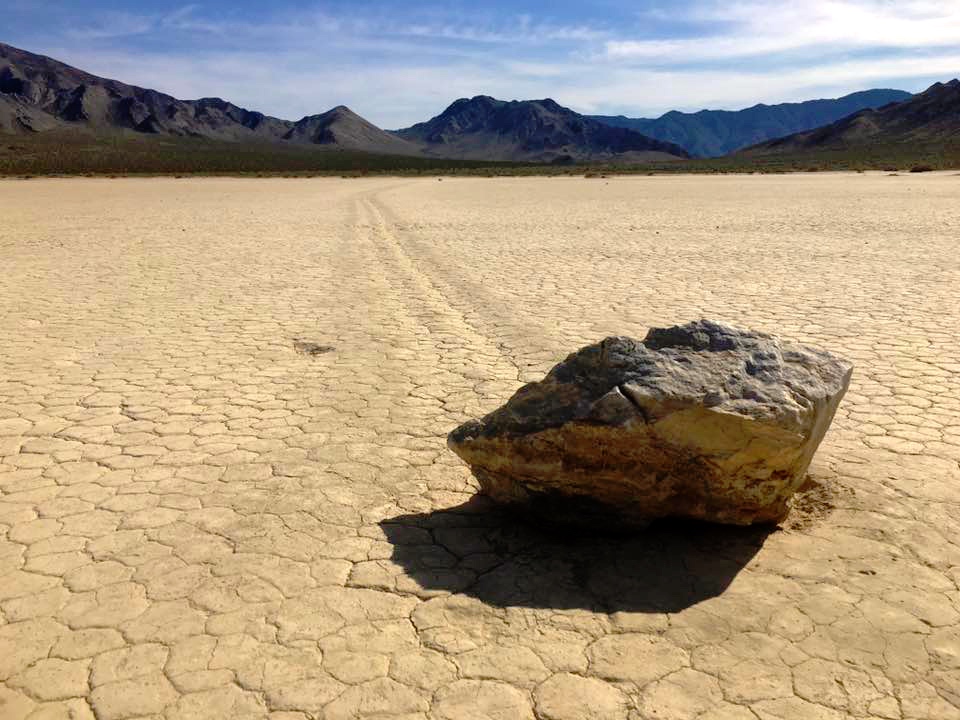 On the north side of the playa is a rock formation called the Grandstand.  It was formed by volcanic activity, and the contrast makes it stand out on the playa.

After lunch, Brian’s family and Mike’s brother with Aaron’s wife, Kim went back in the jeeps on the road we came in on.  The rest of us headed to Lippincott Canyon on our bikes.  This is known as a difficult road to ride/drive, and if you get stuck, there are no tow services, but we all were high in moto mojo spirits.

We started down the canyon and tackled the most difficult section of 15% + grades, rocks and ruts.  After that, there were still difficult sections to come.  I was riding down one of these sections and hit a rut from a washout, my wheel turned slightly and it was enough to knock me off the bike.  Just a little tip over, but I put my hand out on instinct and bent my fingers back on the cliff wall.  Ouch!  Brian helped me pick my bike up, and we continued on.

I didn’t have a photo of this steep first section, but here is one I found from the internet that gives you an idea of the first part of the ride.

After a few minutes of adrenaline settling, I could feel something was very wrong with my hand.  I couldn’t keep a grip on my handlebars.  Pain was shooting up from my fingers to my elbow.  I figured something was wrong, I hit yet another rock and with my lack of grip, I fell again!  Here is a shot of both me and Andy falling on this stuff.  You can’t see the terrain from this view.  I was going to help him pick his bike up as he was coming to help me pick up mine.  Teamwork!

Me and Andy (photo courtesy of Jeff Schaffer)

As you can imagine I was starting to lose my moto mojo.  I knew we still had about 20 miles of dirt to cover plus 60 miles of asphalt.  I put my “get ‘er done” hat on, said a few choice words to the rocks and said to myself, you got this!  There was one last difficult section I knew I couldn’t do with my hand feeling like it was, so Brian was gracious enough to ride my bike through it.  The rest, I could manage on my own.  The boys were patient with my slower, careful speed and our spirits rose once again. Let’s go!

We finally got to some level gravel road and I learned the faster you go on washboard terrain, the less you feel the jarring.  I focused on the beautiful sunset against the Joshua trees, hit the throttle and continued on. 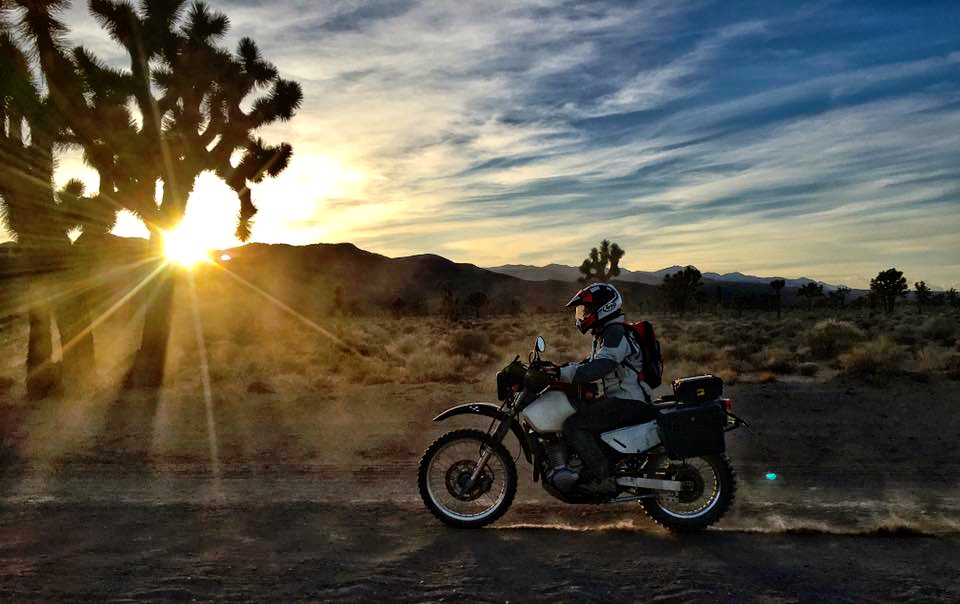 Mike leading us out

We arrived back to camp around 9:30 pm I think.  Mike, Pedrick and I headed straight to dinner at the cafe, then the showers.  My compadres felt I should go to the doctor and Pedrick found an ER in Pahrump, NV (the name kills me), one hour from camp, so we went in his jeep.  They determined my hand was indeed broken, wrapped me up and I got back to camp around 3:30 am.  I woke up with the sun, and Mike captured my pre-coffee, bummer face.

Just get me some coffee!

Regardless of the little mishap, I had an amazing day of riding.  I also learned some things.  Nearing the end of the trip, this last day would be a day of taking in a museum, visiting a neighboring town, and another hike.