Ghost Town off the Beaten Path 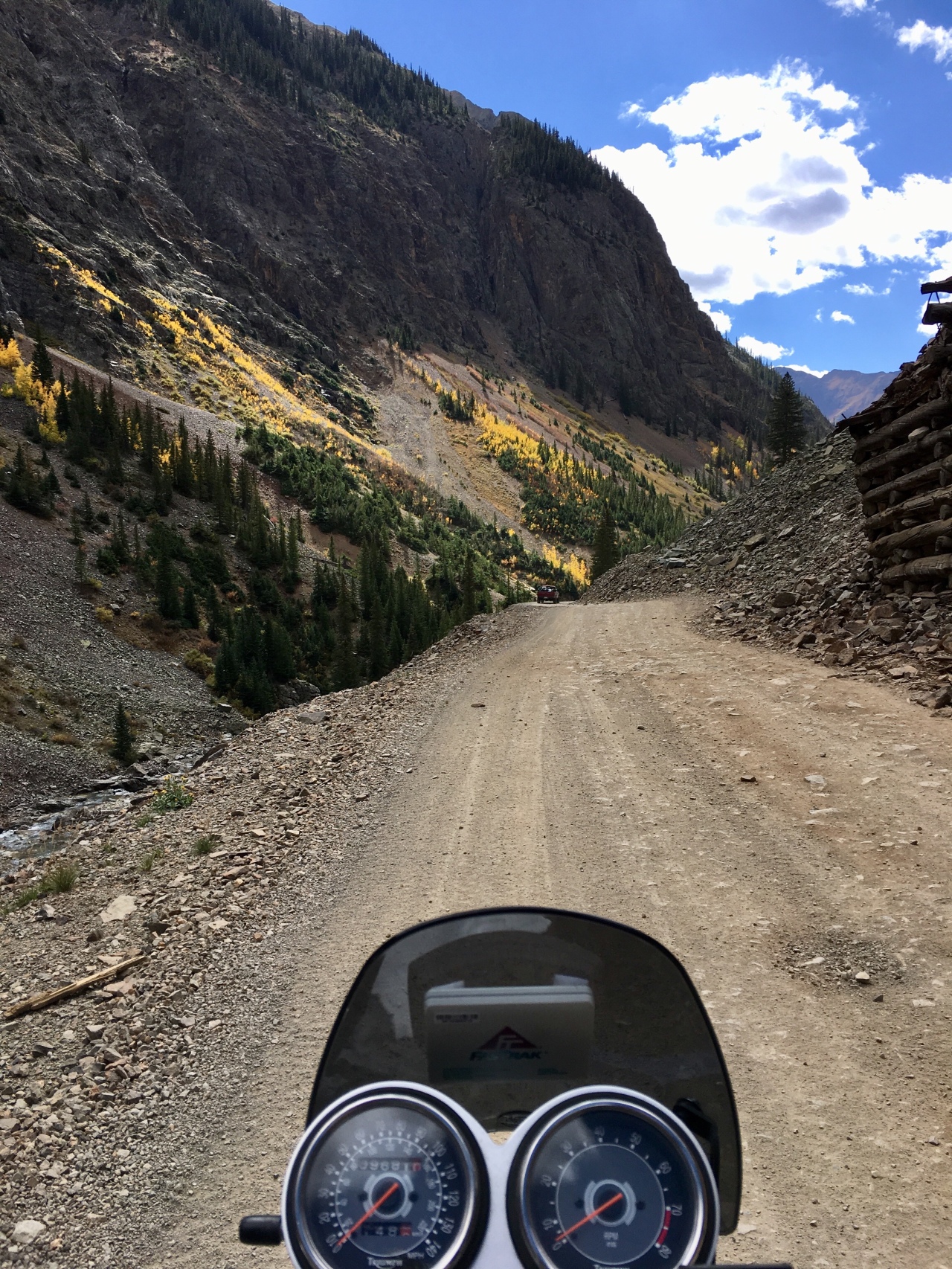 Today was they day to search out and explore Animas Forks. It’s a little ghost town about 12 miles outside of Silverton, CO. Crazy Mike and I share a love for old West ghost towns so he told me about this place and I knew I had to see it.

I made my way down the Million Dollar Hwy once again in the cold mountain air. It’s about a 45 minute ride down to Silverton from Ouray. Speaking of a million…I could ride this road a million times and never be sick of it. I did take a few more shots on the way in and on the way back. This was Bear Creek Falls but there was no water running down. 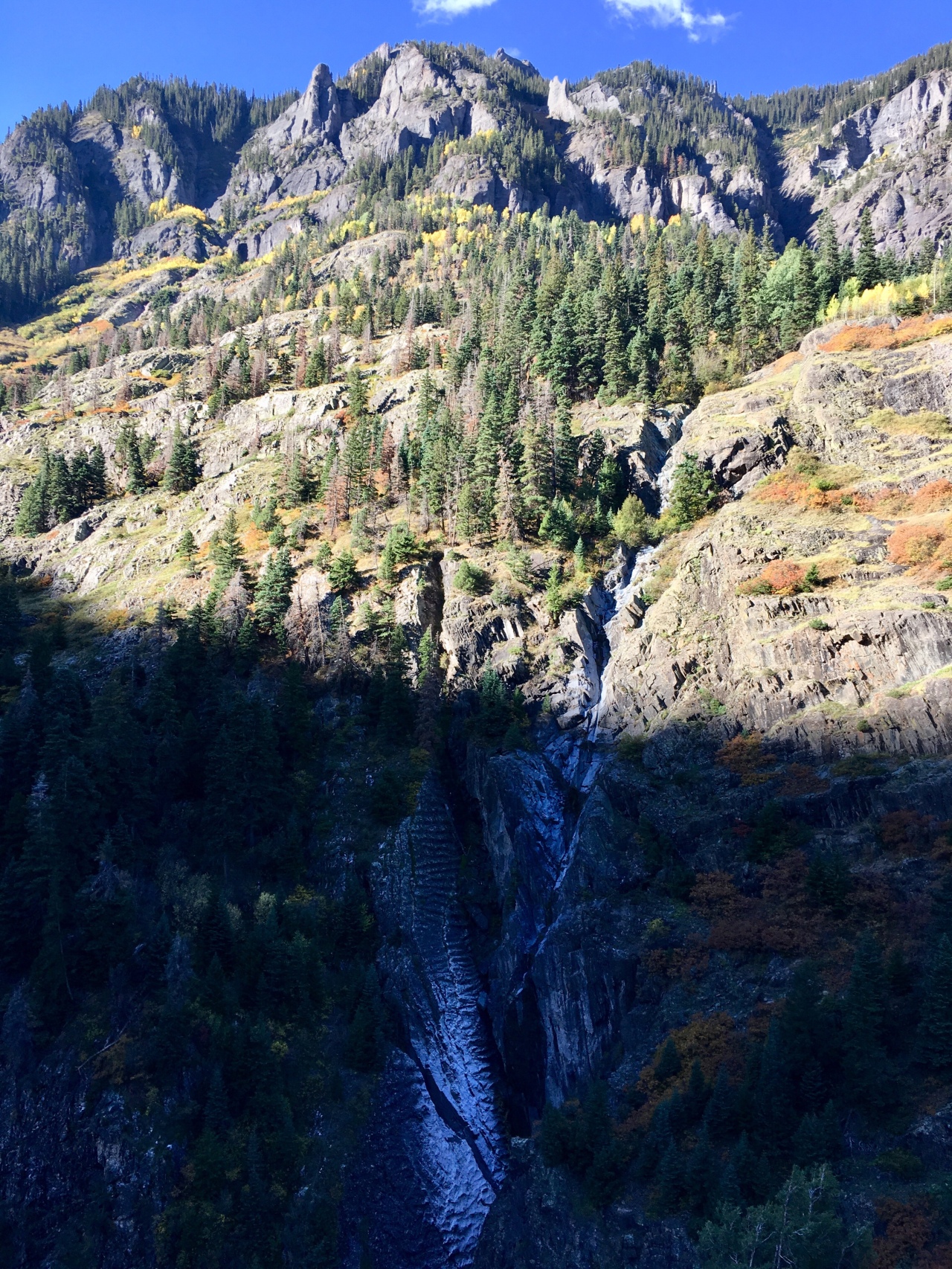 The sun rises around 7:15 ish am but it takes almost an hour for it to reach over the top of these mountains.

Onward to Silverton I rode, navigating the best I could with Google maps before I lost service. It wasn’t hard though, just a few turn offs. The road I was on turned to gravel. It was a wide, easy dirt road that the Bonnie had no trouble navigating. I rolled on and enjoyed the mountains and fall colors. 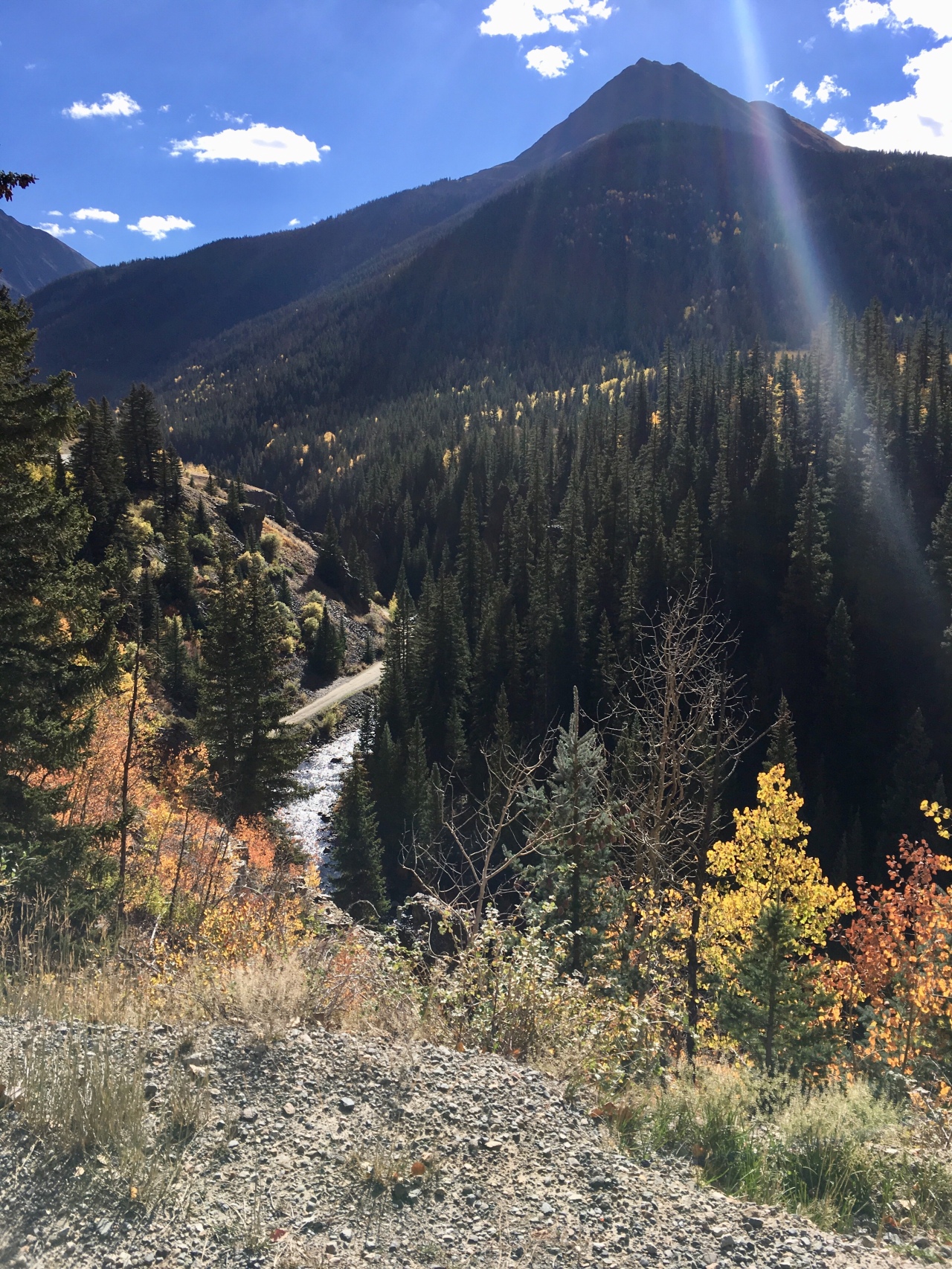 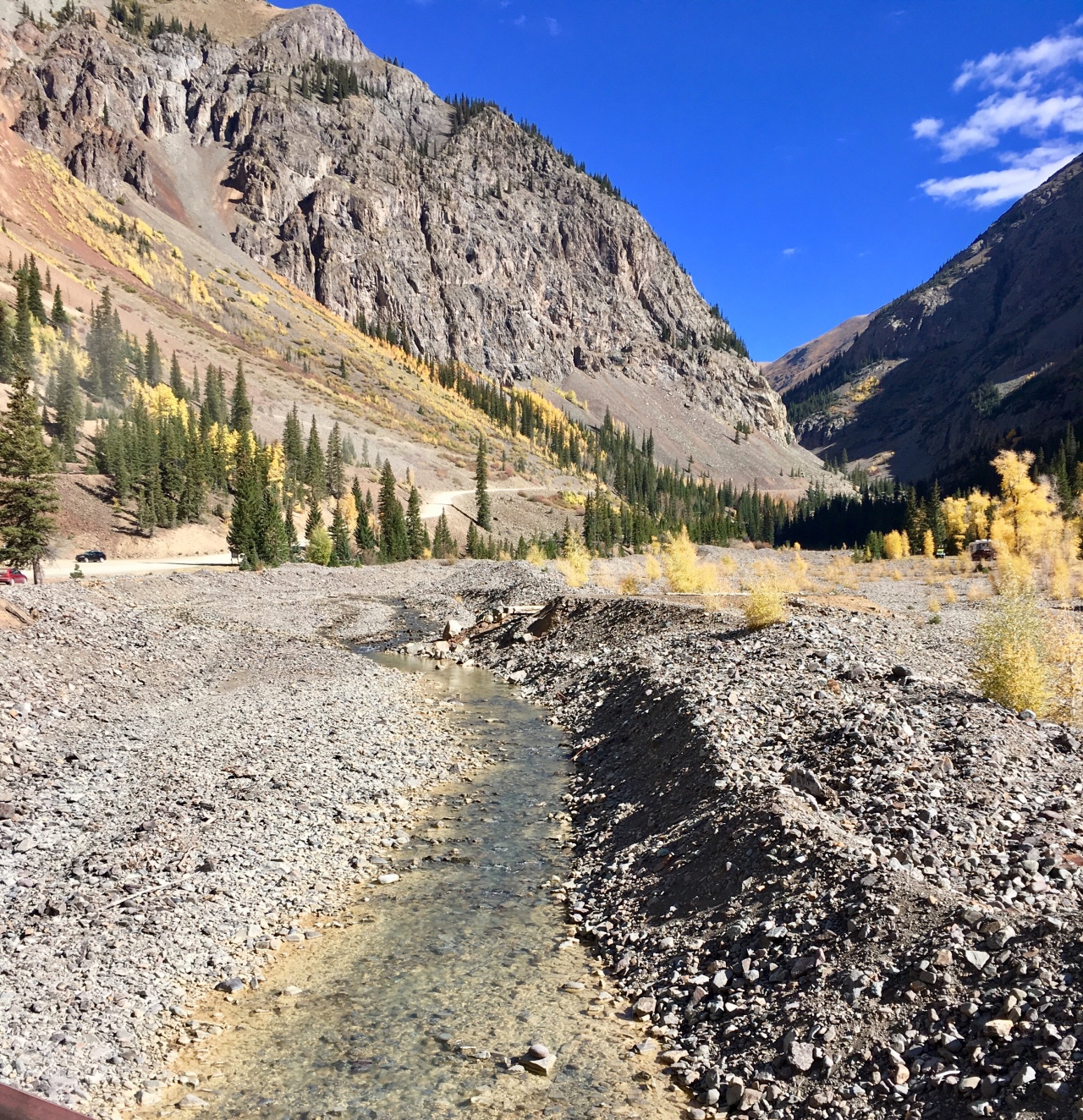 I then got to a Y in the road. I knew which way I had to go and there was a big sign that read “high clearance vehicles and 4×4 only! I thought….hmmm…really? But I had already come all this way. And, if it gets bad, I can just turn around. So, I dropped it down to first and started my way up.

At first, it wasn’t so bad. Not like the nice gravel road I had just been on. But not horrible. Then…it started to get rockier. And not just a few rocks, but rocks that took up almost the whole width of the road. I saw ATV’s and a few Jeeps slowly navigating their way up. I never saw one car. Here is where decision making could’ve happened but….apparently it was also on vacation.

The only section that was less rocky was the very edge. I just told myself, don’t look down. Of course I did. It was motivation to hold my line. It got rockier as I went up and then pretty much stayed like that. A few sections I had to stop and take a breather. I let some air out of my tires for better traction and that helped. A few guys on dirt bikes rode by and looked at me like I was insane, and then gave me the thumbs up. To which I gave a head nod in return.

The Bonnie climbed and climbed, didn’t falter hardly at all even in the elevation. I stopped one guy coming down and asked, is Animas Forks close? He said, oh yeah it’s just right up there. I said, does it get any worse than this up there? He looked at my bike and said…if you’ve made it this far, you’ll be fine. Okay! Off I went.

I finally made it to the top, it was less rocky up there and easier to ride on. 11,200 feet! I had to pee so bad so the out house was the first stop. And then, on to the ghost town. 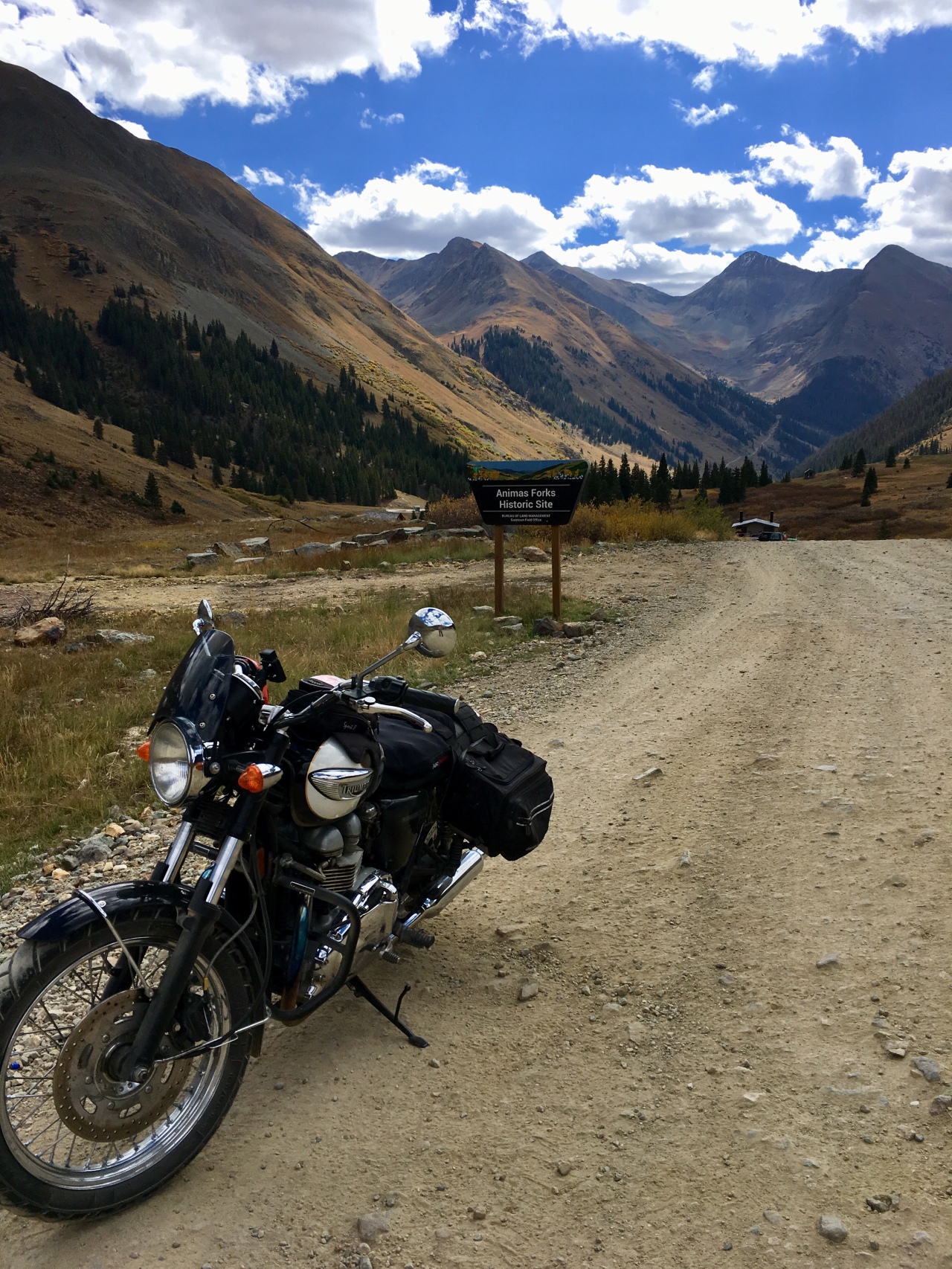 In 1876 Animas Forks was a pretty big mining community. It had around 30 cabins, a saloon, a jail, post office, and a general store. Around 450 people lived there. Like many of the old west mining towns, it experienced its decline around 1910. 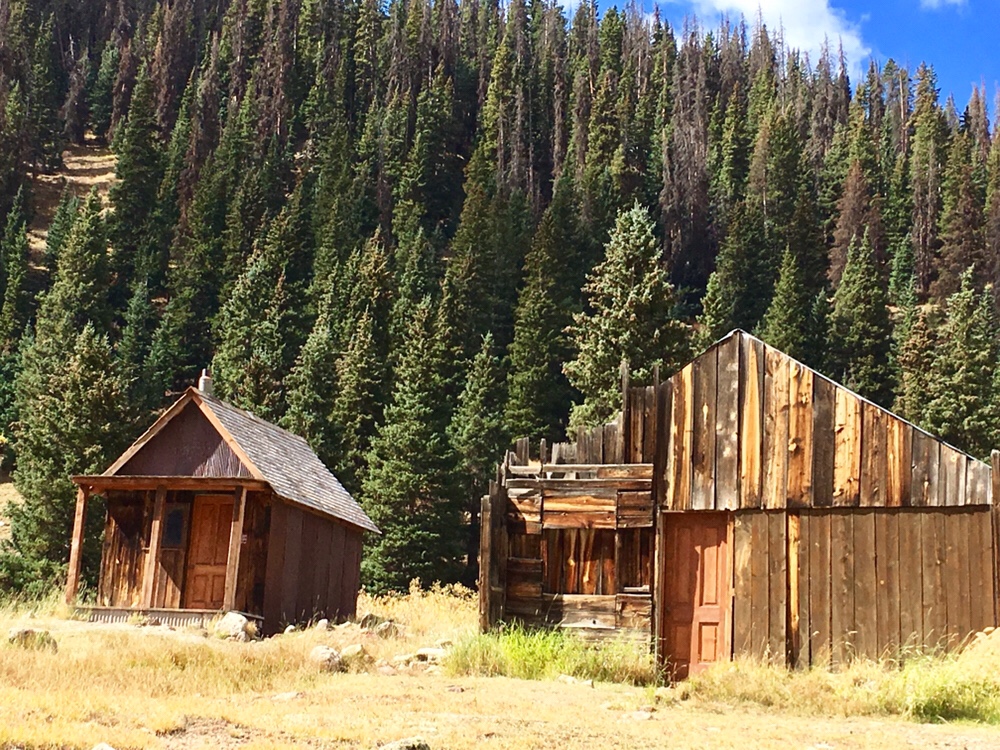 The mining equipment was taken out and brought elsewhere, but as you can see, many of the old buildings still stand. 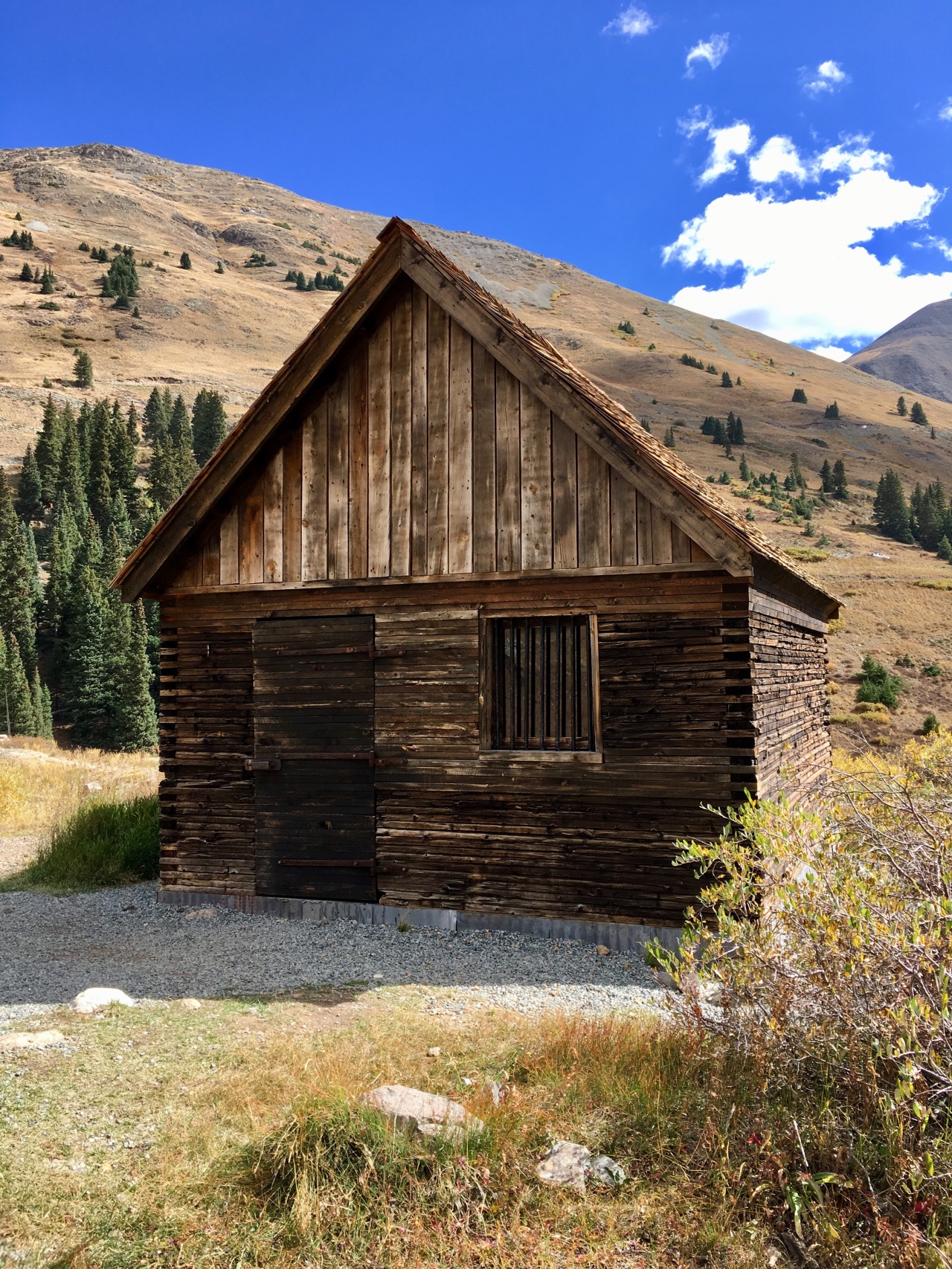 This house looks small from the front, but it actually had quite a few rooms that went pretty far back. 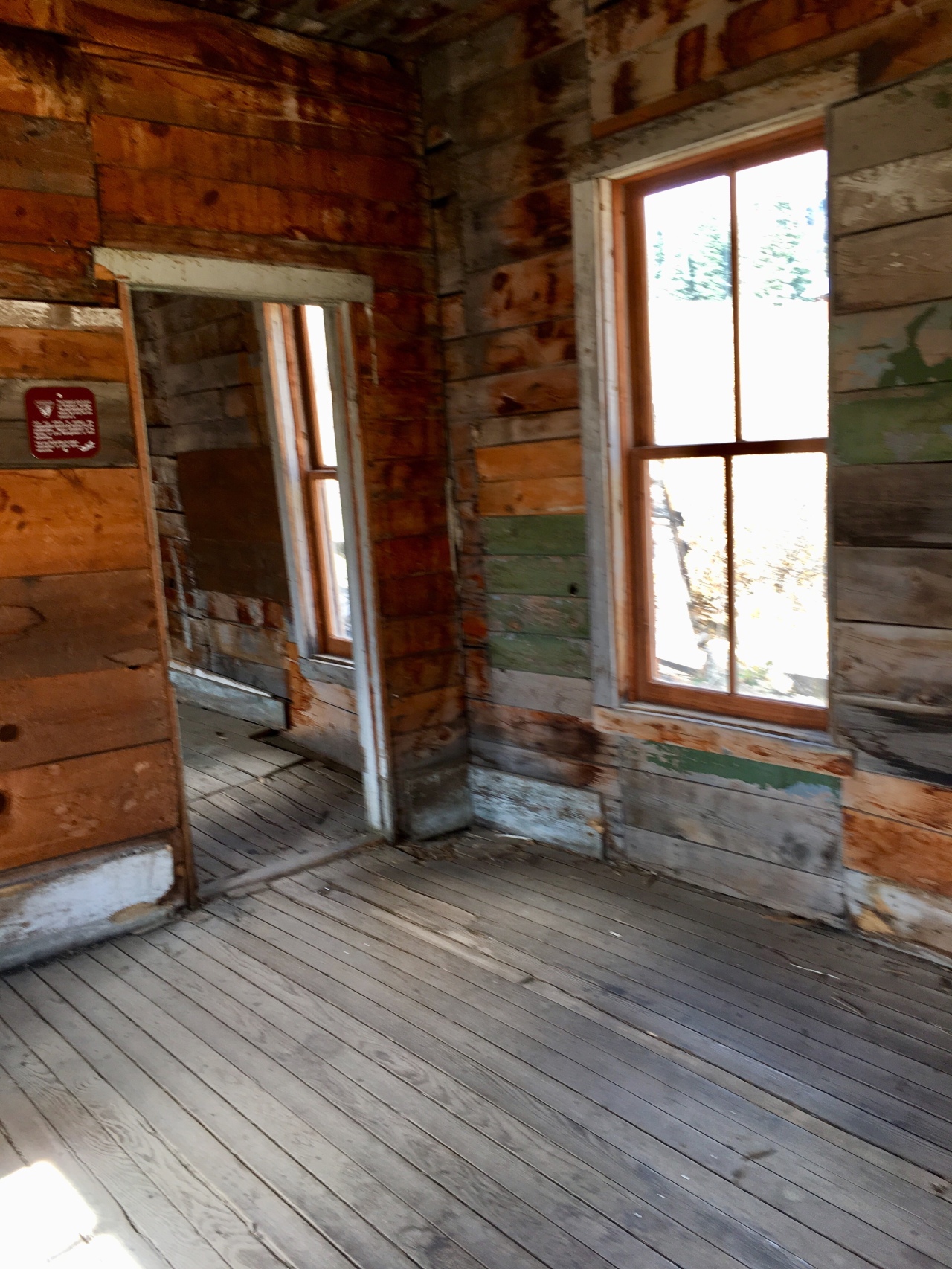 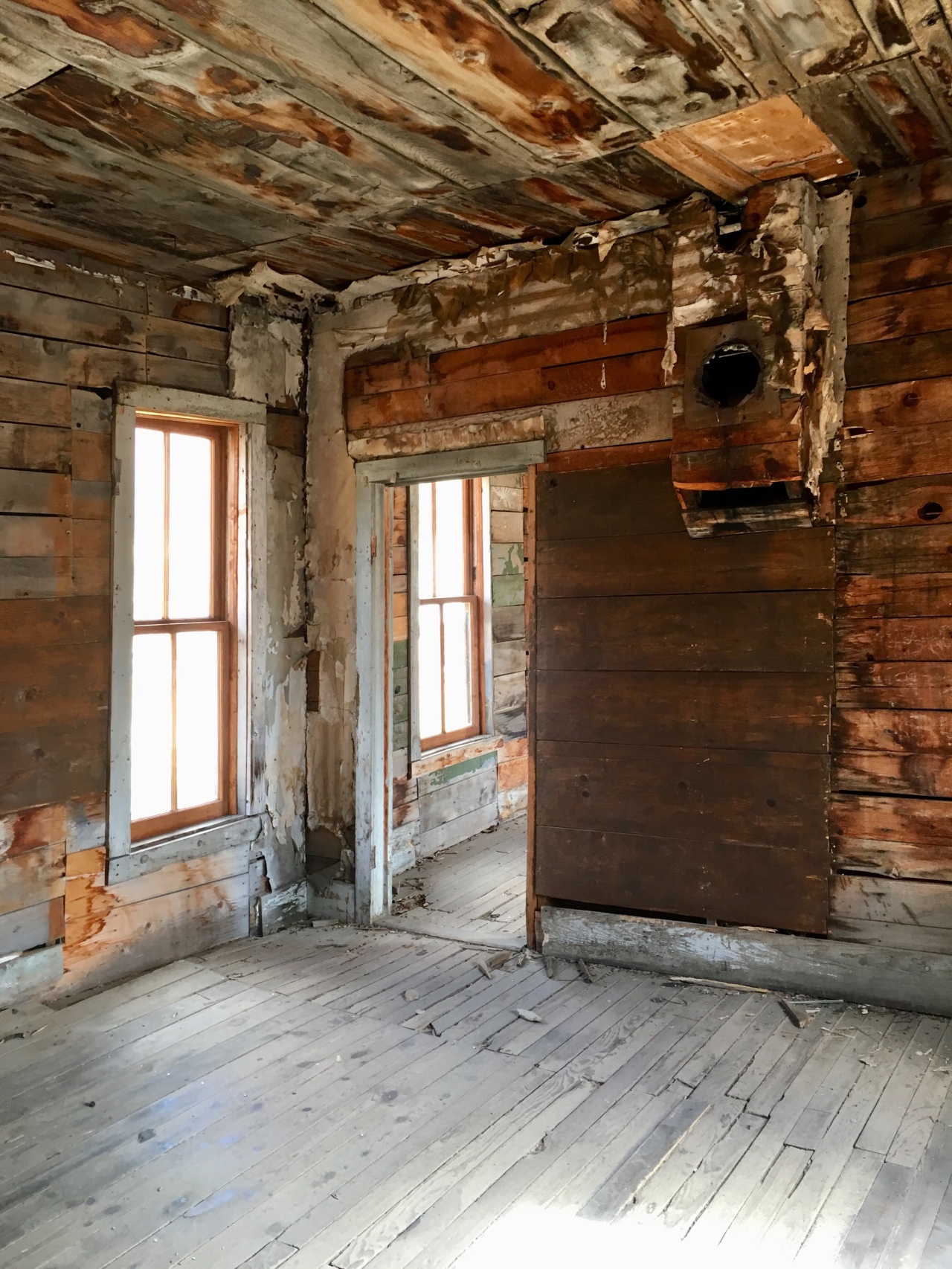 And a few others, this one belonged to a more prominent family, I love how they had the big windows. 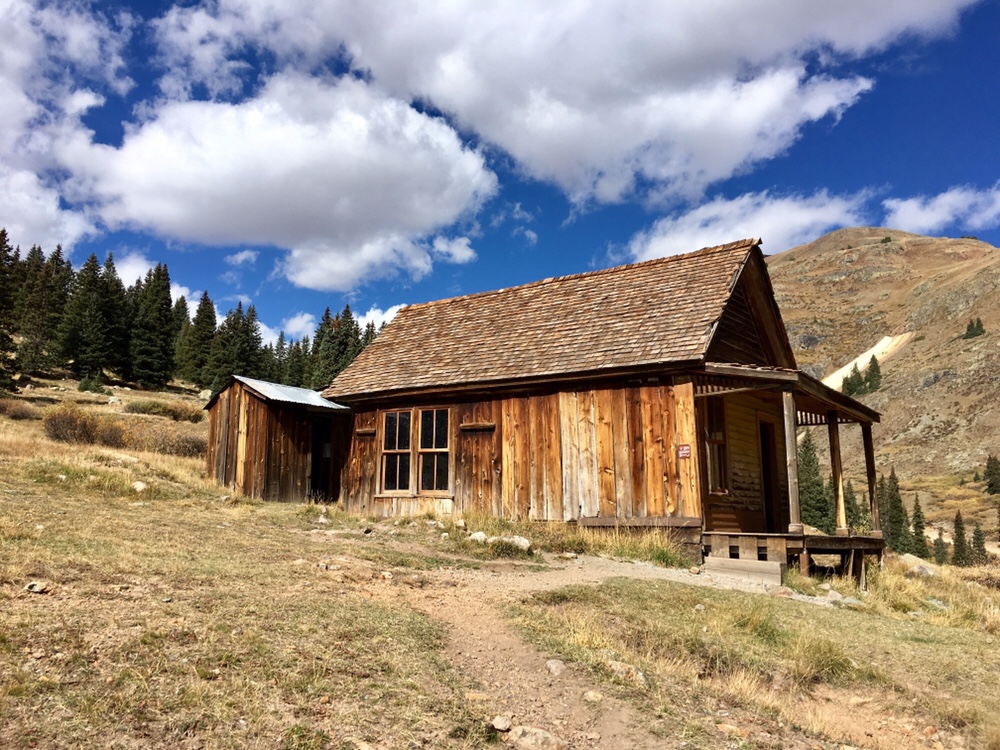 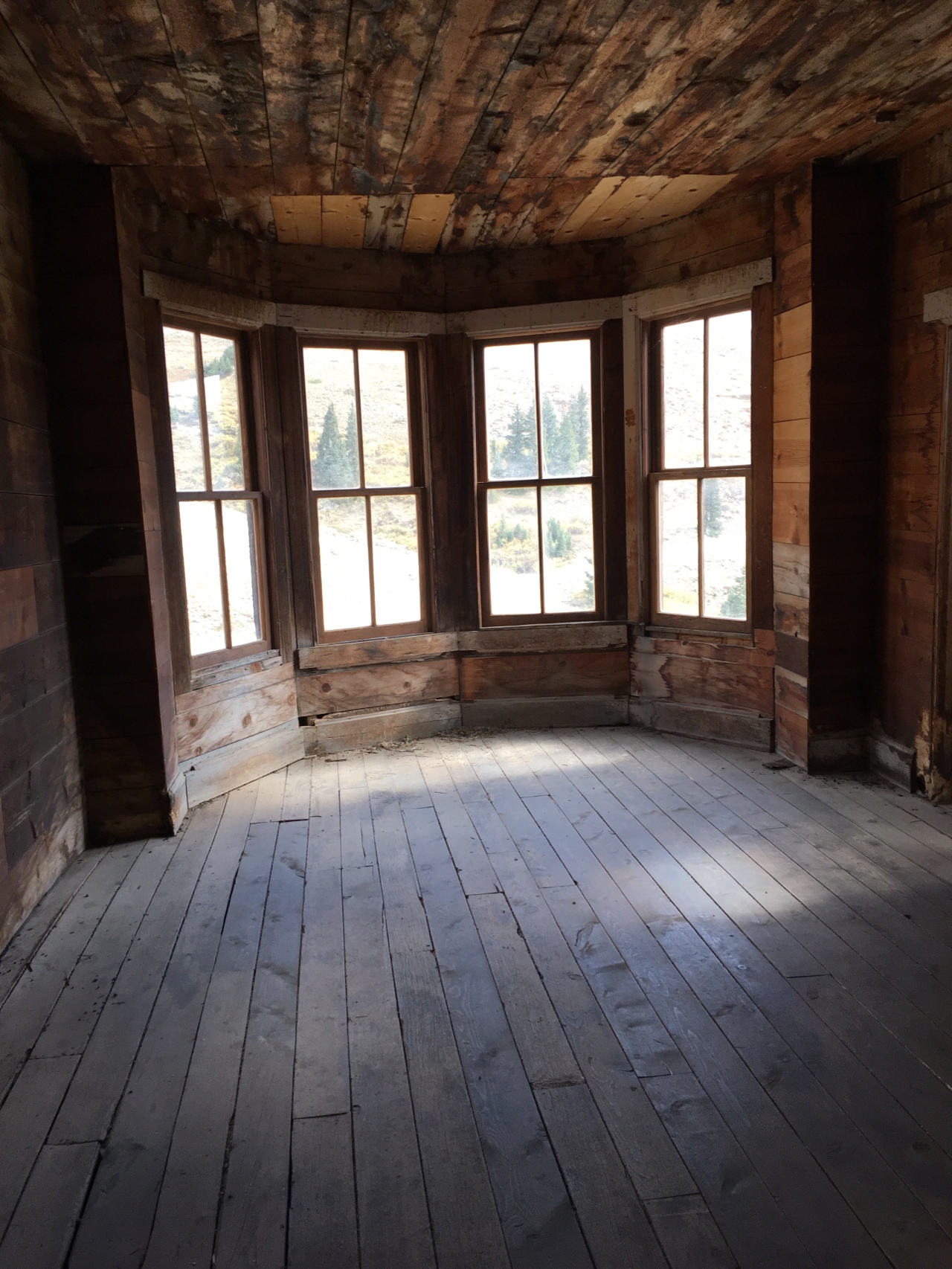 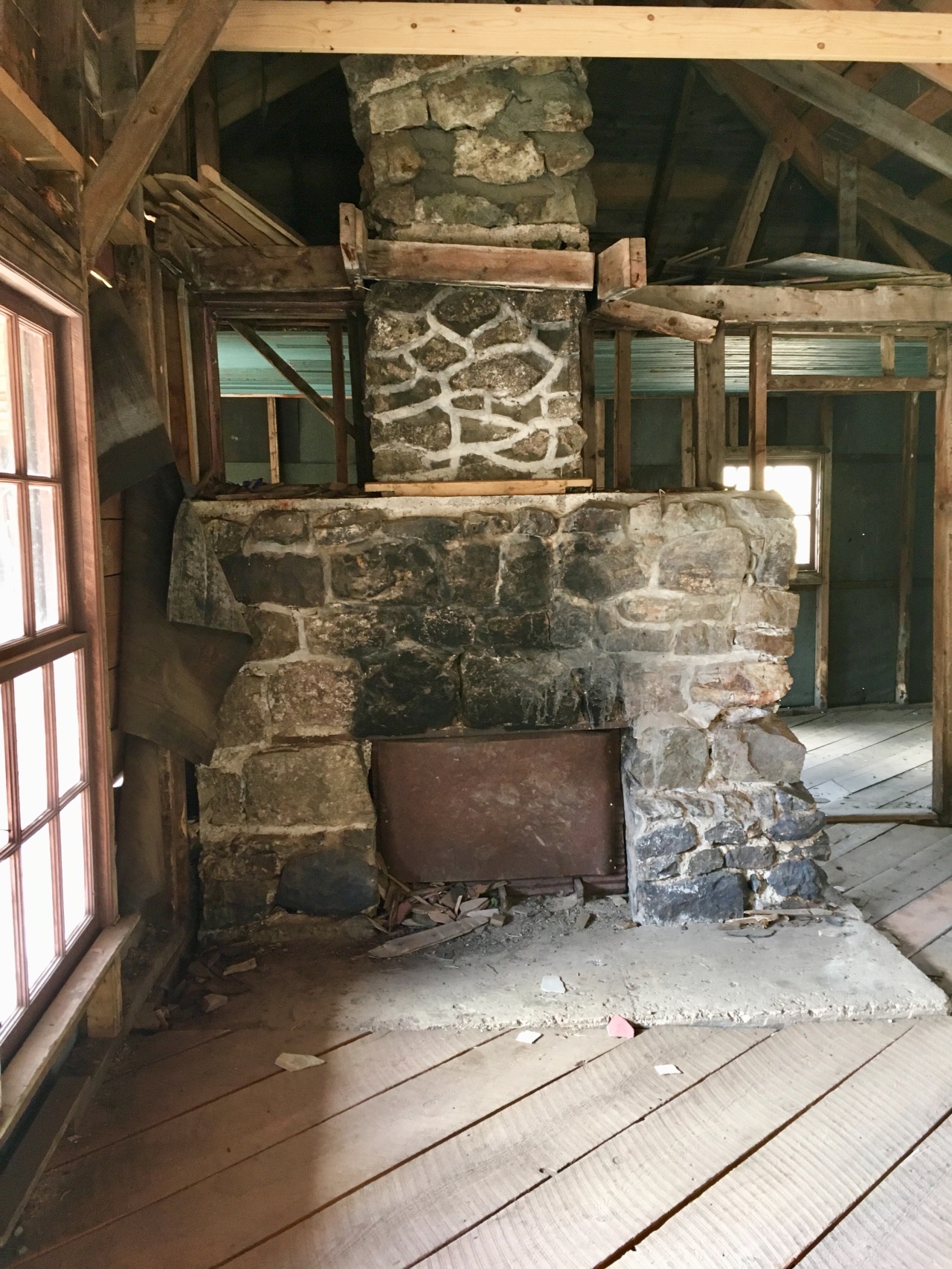 I guess in the 1890’s they had a 23 day long blizzard that dumped 27 feet of snow. They built snow tunnels to get to the various buildings, many of them leading to this one–the main mine shaft. 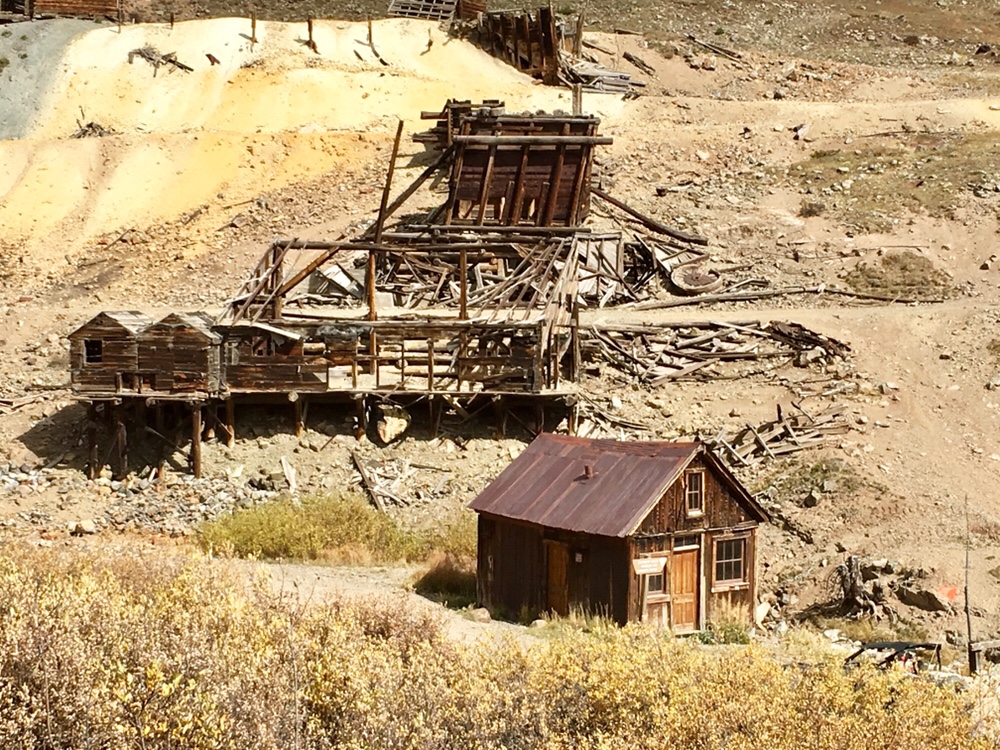 I walked around and explored all the old buildings for some time, then decided I’d make my way down the rocky road and have lunch in town. Going down the road seemed a bit easier, and before long I was on smooth gravel, and then pavement in the cute town of Silverton. 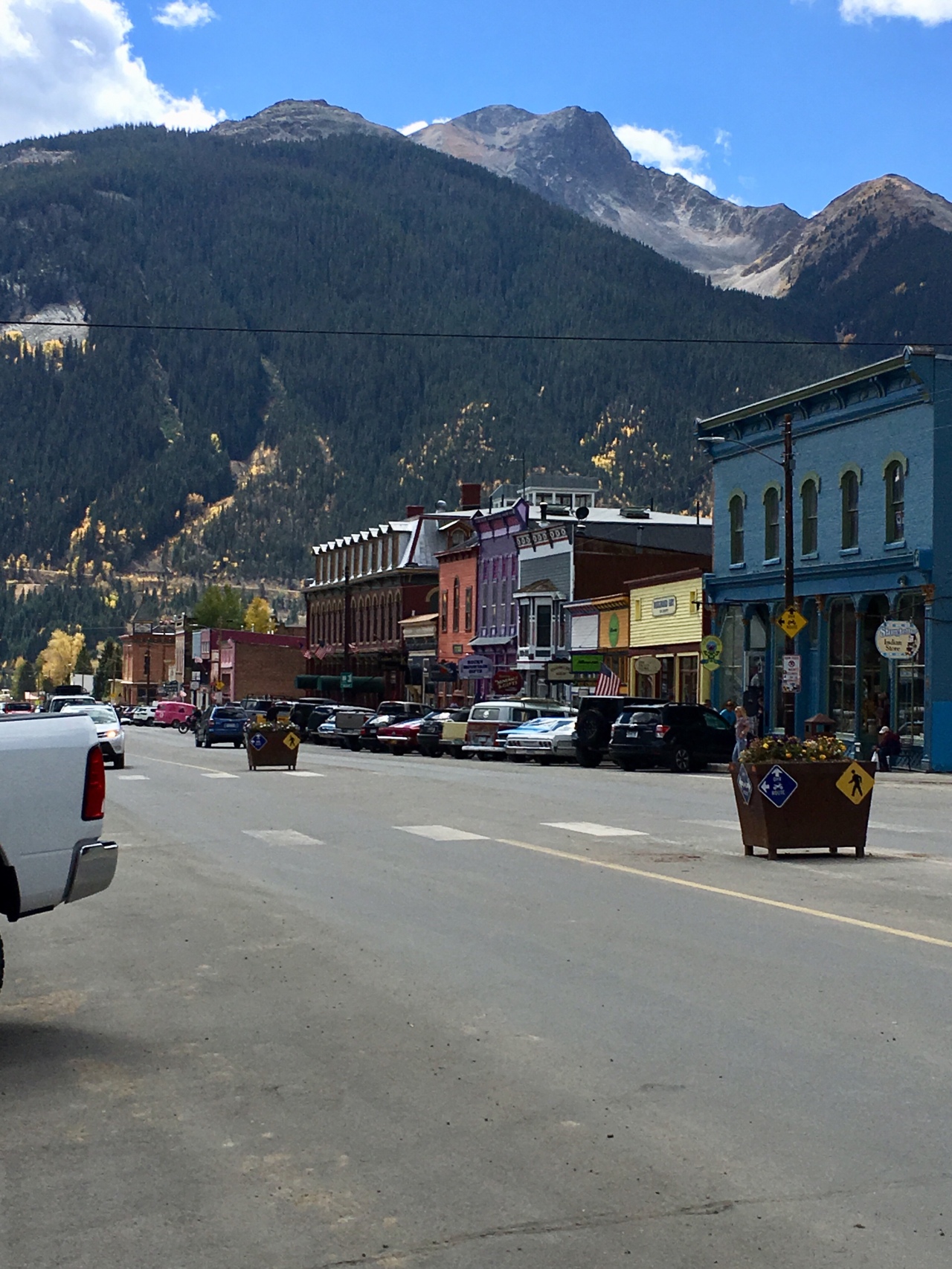 This was a fun little stop, lots of cafes and restaurants, as well as unique gifts and saloons. Mike recommended the pink BBQ house. I saw it immediately, not hard to spot. This place was featured on Diners, Drive-Ins and Dives. You know the quirky blonde haired guy on the food Network? So I stopped in. 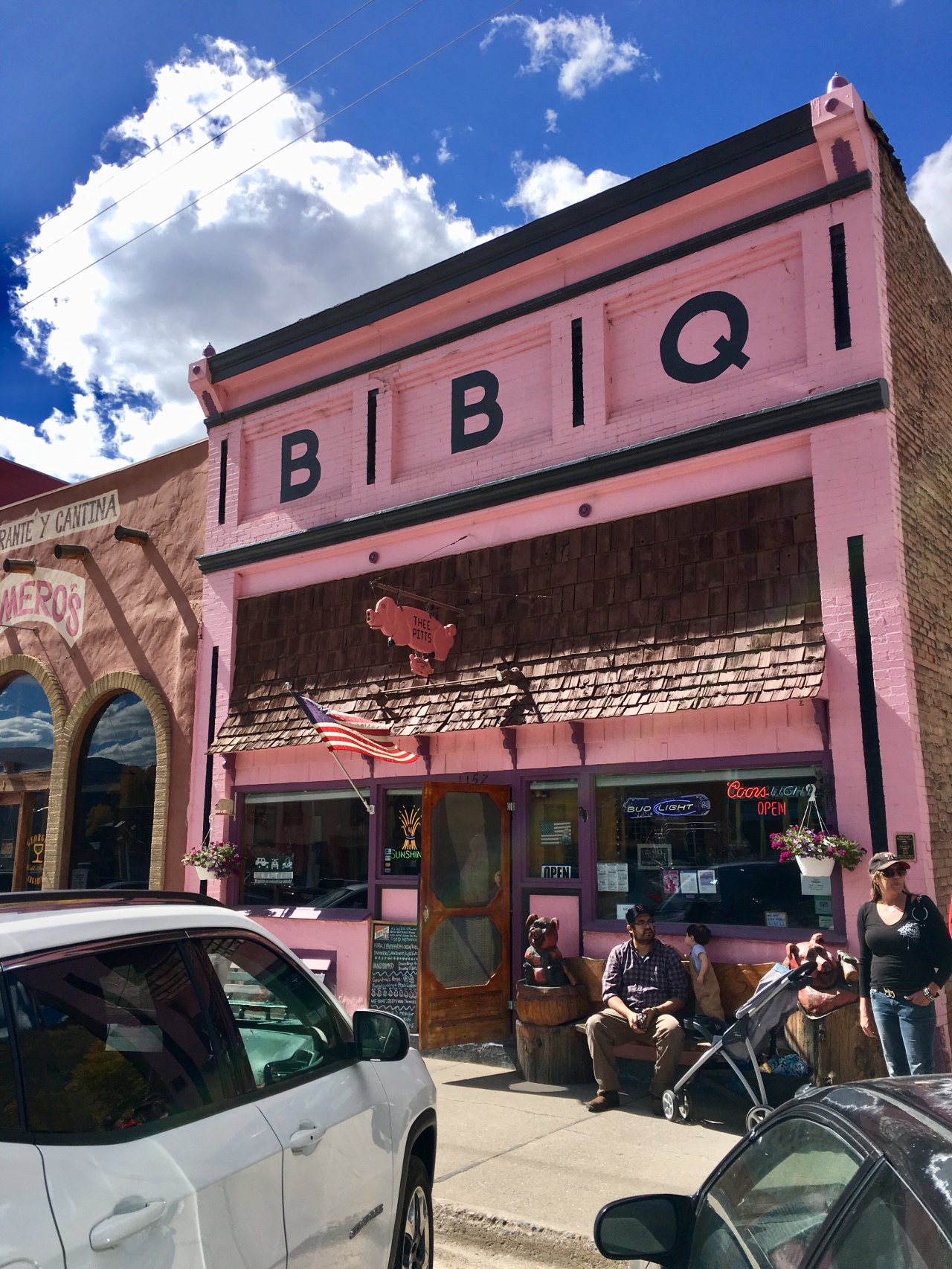 I already liked this place because it was unpretentious and laid back. The smell of BBQ in there was insane. I ordered the pulled pork with cornbread and potato salad. O M G. It was so damn good! 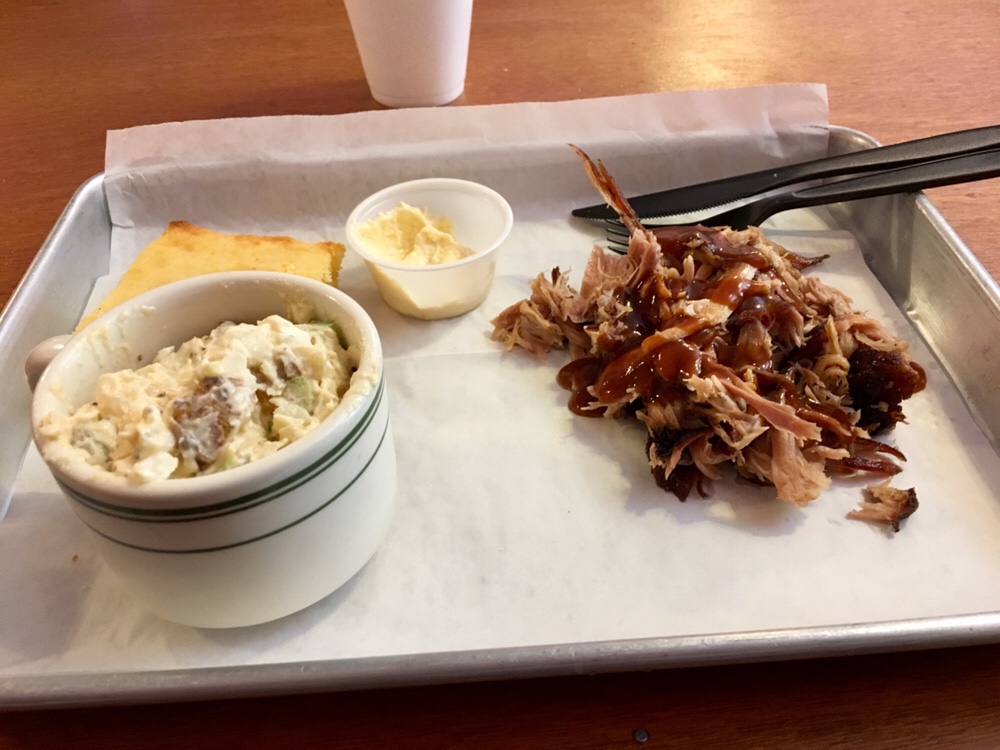 I got the small plate because the regular plates they really load you up. This was perfect.

After that I walked around and looked at some shops. They had a big old fashioned train out on the street. I’m not sure but I think it actually runs (for tourists purposes only). They were blowing the whistle as I walked by, getting ready to go, I think. 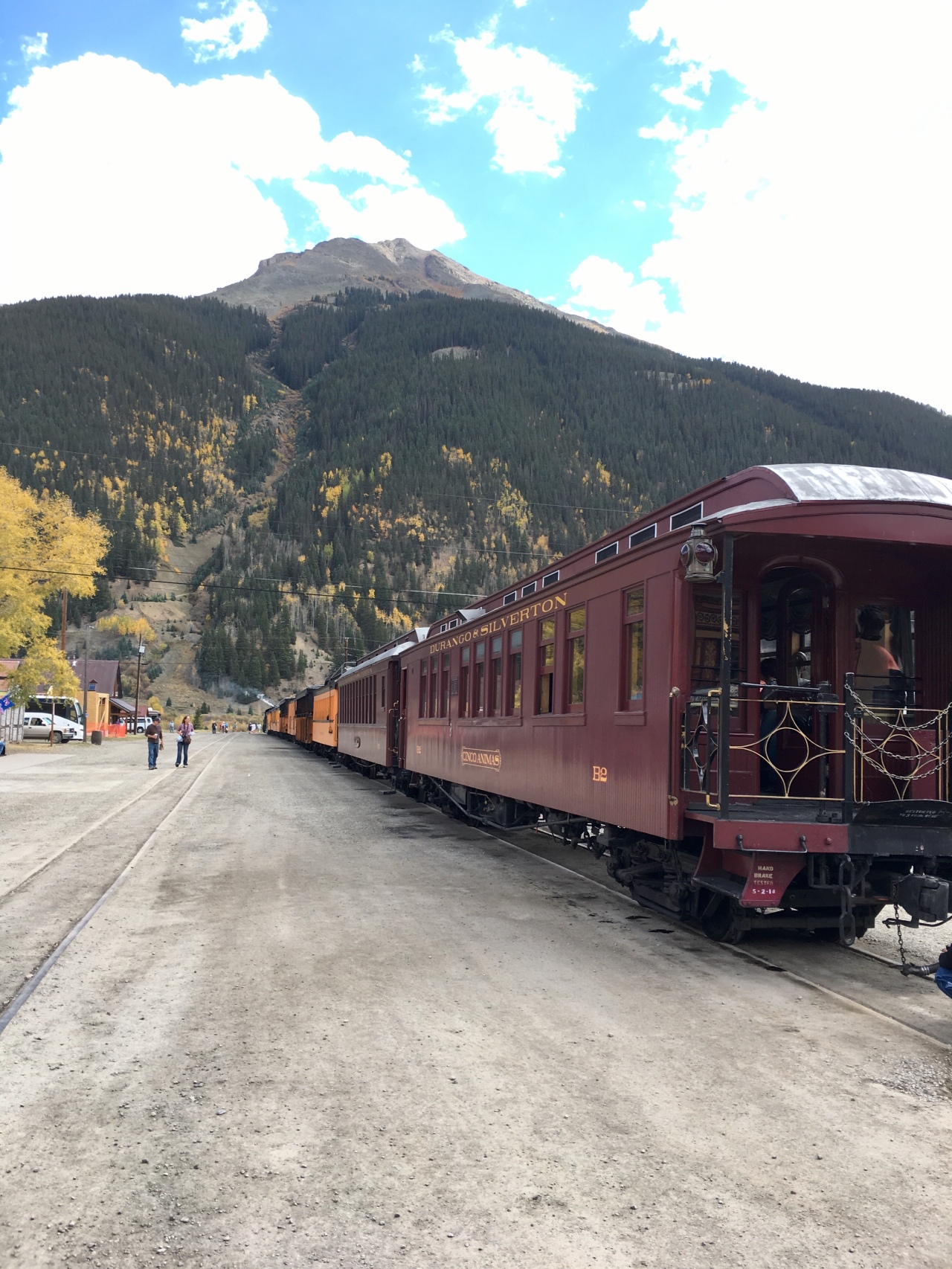 After lunch and checking out the shops, I was ready to head back to Ouray. I stopped at the gas station to fill my tires back up to normal pressure before hitting the million dollar hwy once again. A few shots of Red Mountain I took on my way home. 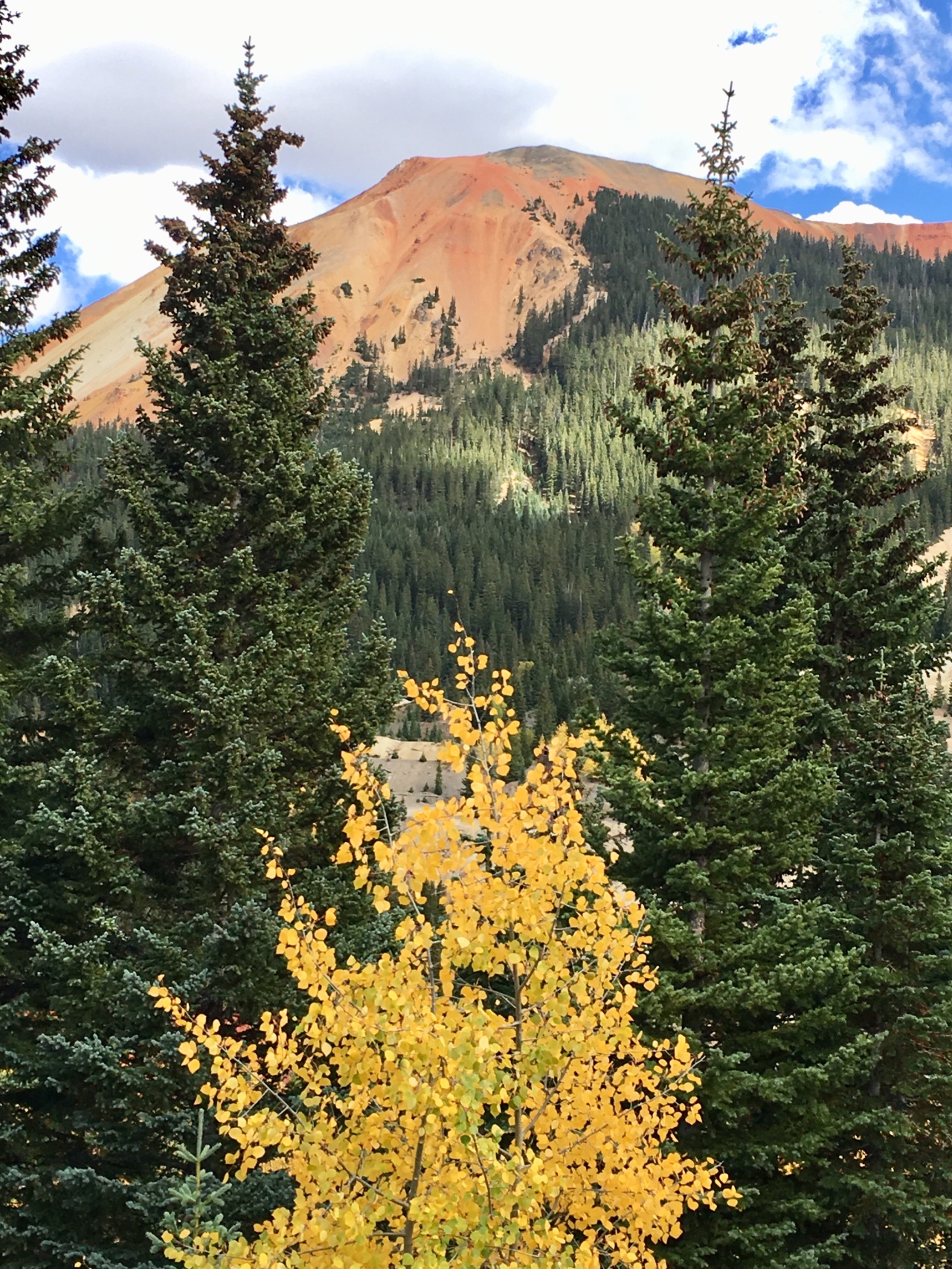 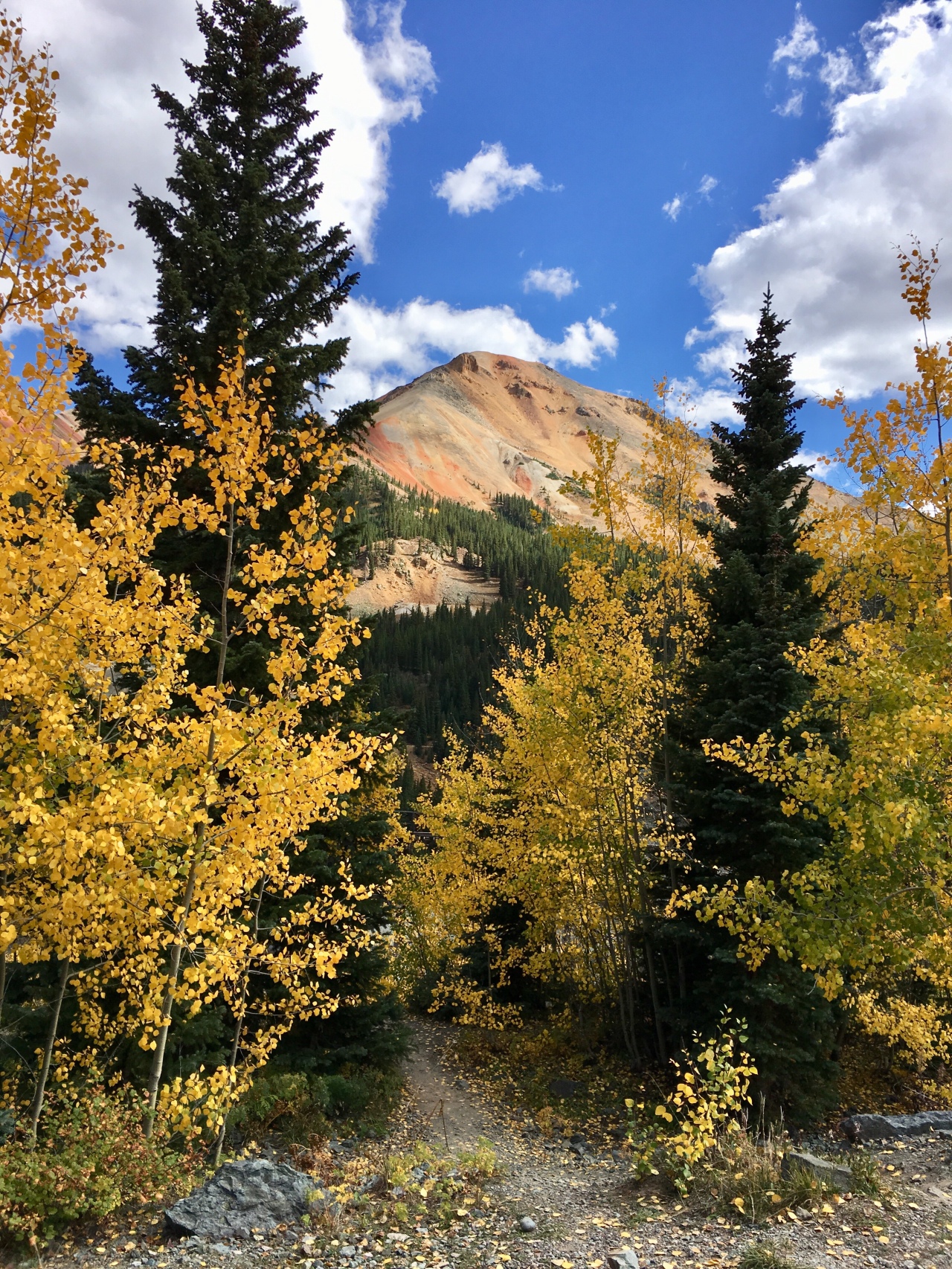 I rolled into my little cabin site around 5:30, unloaded the Bonnie and took a shower. It was another adventurous day for sure, and I was glad to see that Gary was still hanging on through the rough and dirty ride we had. 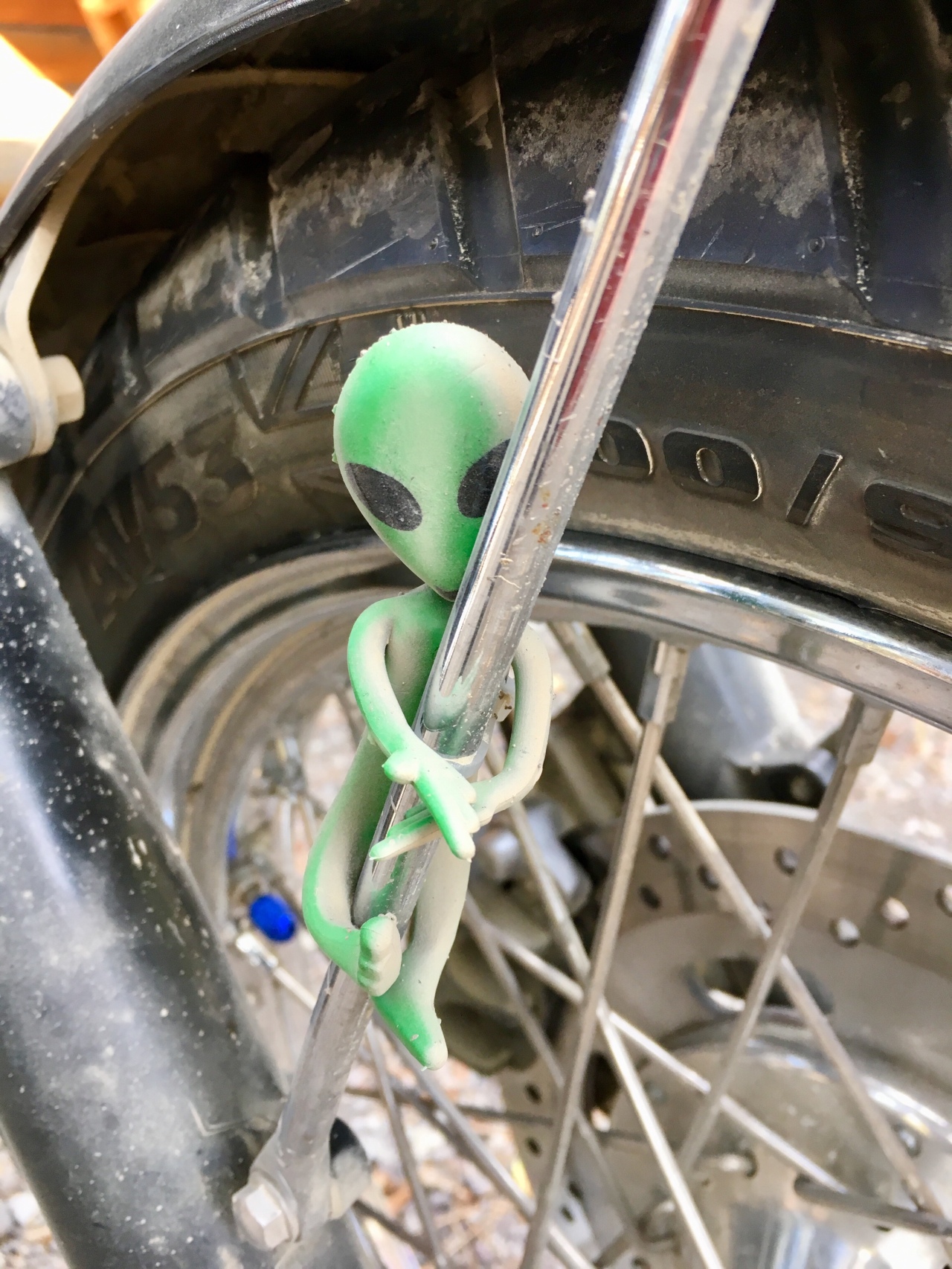