When I first bought the America, I knew it was different from anything I’ve ever ridden.  The America is Triumph’s version of a classic cruiser.  I had really only known dirt, sport, and sport-touring bikes.  Since touring is on my agenda for years to come, I wanted a cruiser.  However, the relaxed position with feet forward was a new experience and felt a bit awkward at first.  I knew my reaction time would be slower while I was getting used to the feel of it.  I decided it would be a great idea to take the MSF Experienced Rider Course.  It’s for people who have experience riding but want to take it to the next level or, like me,  have a new bike they want to practice their skills on.  That was definitely what I wanted. 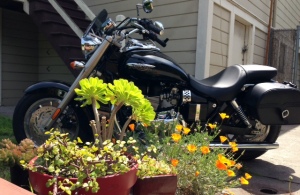 The course was in Carson City, NV, a good four hour ride from Oakland.  My sister and brother in law live in Sparks, NV–just 30 miles outside of Carson City so I thought it would be fun to make a weekend trip out of it.  I decided to take the very long way to my sister’s house.  Sure, I could fly up the super slab and be there in about 3 1/2 hours but it was a beautiful day and there was country side to see. 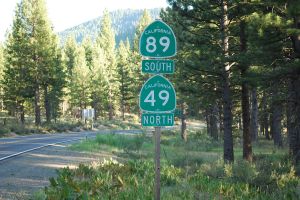 I decided to break off from the I-80 in Auburn and take the much-loved highway 49.  This beaufiful road winds through the foothills and eventually into the Sierras.  As soon as I turned off into Auburn, I had already been riding for 2 hours and needed to have lunch and gas up.  It was hot, already 95 degrees at 11 am.  It was nice to get off the bike, shed a few layers and head into Starbucks for some ice green tea and a sandwhich.  I didn’t stay too long, just enough to eat, drink, pack away a few layers of clothes and I was off again for the most scenic part of the ride. 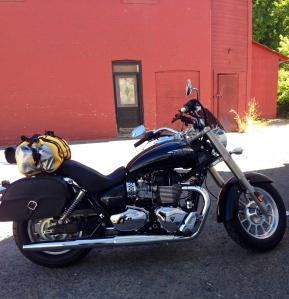 As I got further out of Auburn I saw less cars and more pine trees.  The air smelled so good! Turn after turn brought me to higher levels of elevation, and the America purred around each corner smoothly.  I continued on for a while and eventually rode into my favorite little town–Downieville.  This town was established during the Gold Rush in 1849 and is now is a favorite spot for mountain bikers and motorcyclists.  Here’s a photo of the the town then, and now. 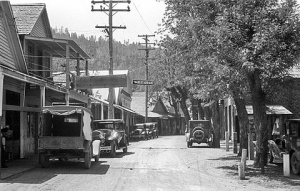 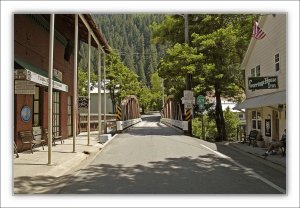 I continued my ride through the beautiful mountain road, winding my way up and eventually heading towards Reno.   The last part of the 49 is a straight shot through a wide open valley with a few rustic mountain farms.  Curious cows stared at me as I rode past, interrupting their lazy grazing.    I eventually dropped down into Reno, then skipped on over to the side streets for a mellow ride into Sparks.  I was greeted with an open garage door and an ice cold water–it was near 100 degrees at 5 pm and I was happy to call it a day.  I tucked the bike in for the night and took a cool shower, then poured a glass of wine with my sister and brother in law.  A happy day indeed. 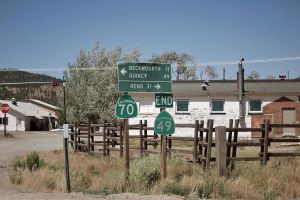 Fast forward through to Sunday, the morning of my moto class.  I arrived a little before class started at 7:30 am.  It was a chilly ride in but I knew that would change in a few hours.  Our instructors were a husband and wife team who had ridden for many years and had been teaching the class for a long time.  In a nutshell, they were awesome.

The beginning drills they had us do were fun.  Emergency braking and slow riding drills.  I felt like I was getting these down pretty well.  However, as the afternoon went on the drills got more challenging and the heat warmed up to a balmy 90 degrees.  I was getting tired but ready to push on.  I was a bit intimidated when I saw the exercises we were going to be faced with next.  U-turns in a very tight space followed by very deep S turns.  It was enough to make us all groan. 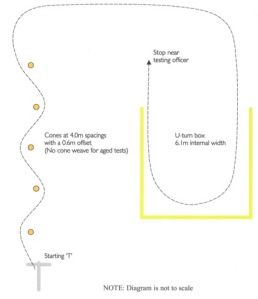 The idea of getting the big, juicy 550 lb. Triumph around those tight turns got me sweating even more than the heat.  But, all the more reason to do it and become proficient at it.  At first I made mistakes, luckily the only consequences were going outside the lines and cones.  To accomplish the U-turn in such tight quarters on a big bike forced me get my butt off the seat, lean over and turn my head in direction I wanted to go.  It’s a basic skill you learn early on and I knew it well, but on a U-turn you almost have to turn yourself around on the seat–a bit unsettling.  However, when I trusted myself (and the bike) enough to do this, it rolled on through staying inside the lines.  My instructor raised her fists in the air as a cheer for me and I immediately wanted to do it again. 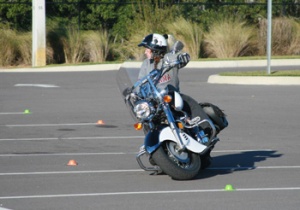 Not me. This is a photo from a similar MSF class, the gal getting her tight turns down well.

At some point during the last part of the day something clicked.  I began to trust my bike more than ever.  Soon I was doing the U-turns and the deep S curves smoothly, staying inside the lines at a slow speed.  I suddenly gained confidence that I was in control of the bike, much better than I had been since I first bought it.  That feeling is priceless and in my opinion, the best thing you can do for yourself if you have a new bike you’re not quite comfortable on.  I rode back to my sisters place with a mile-wide smile.

The following weekend, I took the America out into the twisty hills of Berkeley and practiced what I learned from class.  It’s an experience that was well worth the $85.  If you’re already licensed like me but just want to up your skills a notch, or learn your new bike, I definitely recommend it. It’ll make you much more comfortable doing fun turns like this: 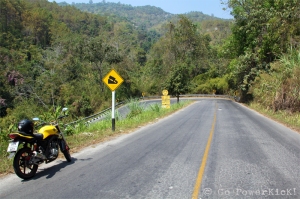 Enjoy, and keep the rubber side down (especially in those U-turns)!