Thursday morning was cool and sunny.  It was hard to believe a storm was coming in but that’s what the weather report was telling us so we started packing up our tents and heading out for our first leg back home.

We stopped just outside of Zion in La Verkin at one of the best little coffee places I’ve been too.  It’s called River Rock Roasting Co. and they had the most excellent coffee, pastries and breakfast sandwiches.

Once our tummies were full, we headed off on a more southern route home to avoid cold weather and snow.  This route included going through Las Vegas, not the most fun–but we decided to stop at the Hoover Dam just to take a look around. 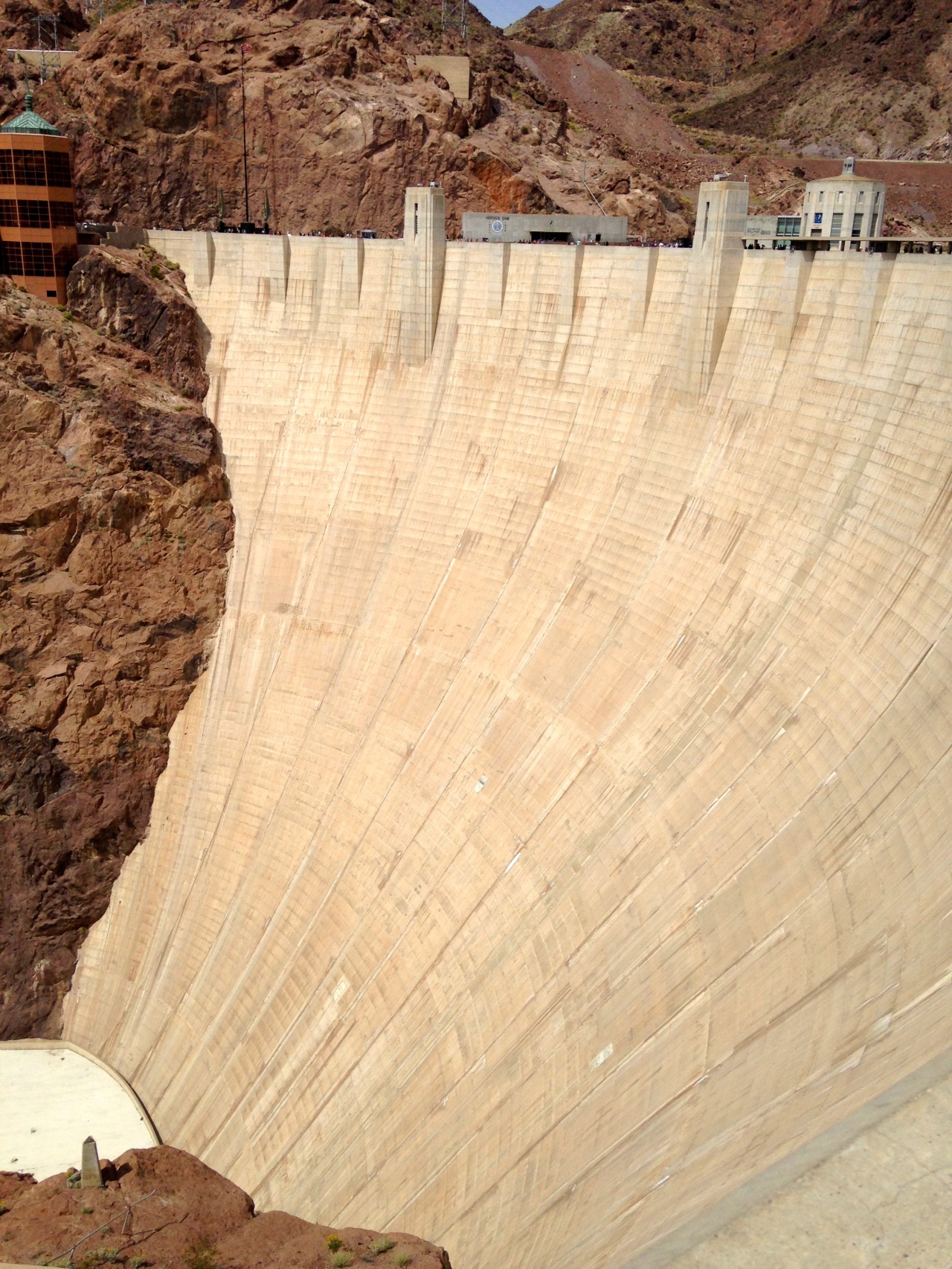 Most of us have been to the Hoover Dam (this was my third time) so we opted out of the guided tour.  But if you haven’t been there before I would definitely recommend it.

After snapping a few photos, we started to look at the weather to see if camping out in Death Valley would be a good option.  It was not.  It turns out there was a huge dust storm in most of southern California and Nevada.  We were already feeling big gusts of wind on our ride into Vegas.

Plan B.  Take HWY 95 south, then 164 over to Baker, CA for the night.  Little did we know what we were about to head into.  We headed out and started into a more desolate desert landscape.  The winds kept increasing with big gusts that made it difficult to ride.

We passed a flashing sign that read “low visibility for next 4 miles”.  We didn’t think much of it.  We knew it might be a bit cloudy with sand but nothing to stop us from continuing on.  Wow, were we ever wrong.  In a big way.

The gusts became so powerful it was pushing my bike into the next lane.  It was cloudy with dust but we could still see each other somewhat.  And then we came upon those 4 miles they were talking about–right next to a dry lake bed.  All the sudden visibility became much worse.  I could only see Jeff in front of me, I could not see the other guys (I was last in our line).

We all turned on our hazard lights because we were on a freeway with a 70 mph speed limit and we could only manage 40 mph because of our inability to see much and the forceful gusts of wind. 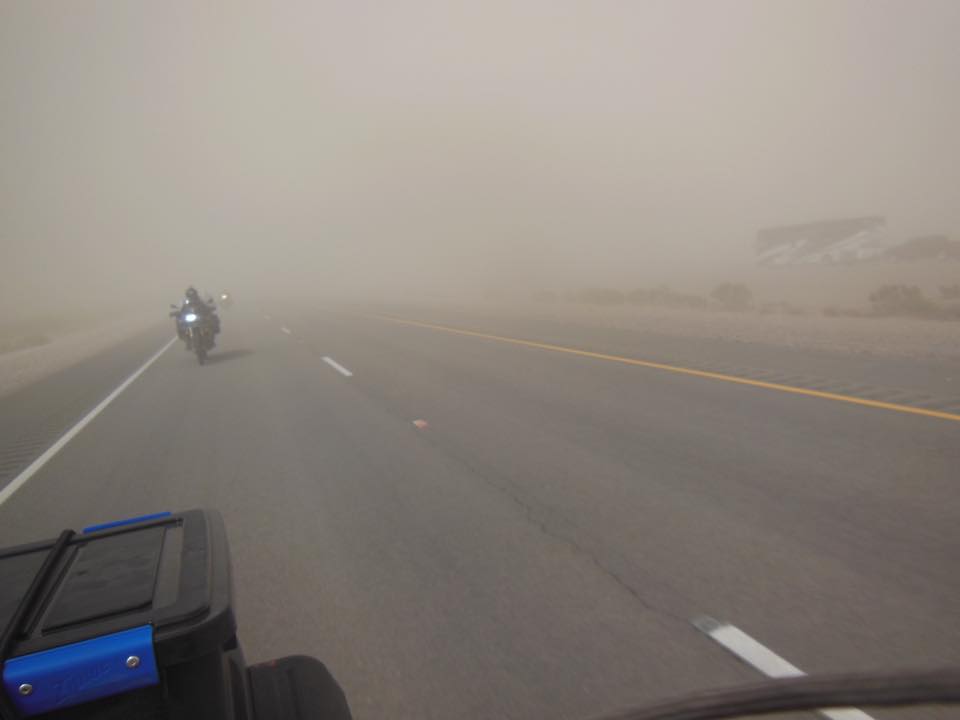 Now I was starting to get nervous, the winds were so strong I could barely keep my bike in my lane.  Just when I think it can’t get worse, the winds pick up even more and visibility suddenly went down to about 10 feet.  I could no longer see anyone in front of me and I was getting pelted with sand and rocks.

Even though I had my visor down, sand was getting in my eyes and nose.  My bike started being pushed over to the next lane and I couldn’t see where I was on the road.  I just tried to keep an eye on the white line to determine where I was.

We all had our bluetooth headsets on and Brian, who was leading, called out his speed and told us he was down to 30 mph.  That helped us gauge our speed while riding blind.  Then I had a moment of F.U. dust storm!  This was not going to get the best of me.  So I geared down, used every muscle I had in my body to grip the bike, and pushed on through to hold my lane.

In a few minutes visibility started to get back to about 40 feet and I could once again see the guys in front of me.  The winds were still horrible, but at least we could see.  10 miles later, we rode into Searchlight, NV and they  had one hotel.  We took it.

We stopped to get gas and actually had to hold on to our bikes while pumping gas because of the wind gusts.  Once at the hotel, we assessed the damage.  Everyone had sandblasted helmet visors and windscreens.  Aaron and Jeff’s phone screens cracked due to the static built up from the sand, and Brian’s camera broke.  And we just had really dirty bikes.  I was SO glad to be safe and off the bike for the day.

Brian immediately went to the liquor store and we all sat in our hotel with a good drink, watching the news.  The wind was reported to be around 50 mph with 82 mph wind gusts!  We saw a report of an overturned semi truck and they even closed McCarran Airport due to wind.  Shortly after that, our little motel became booked for the night, due to other weary travelers needing to get out of the wind and sand.  So glad we got our room! 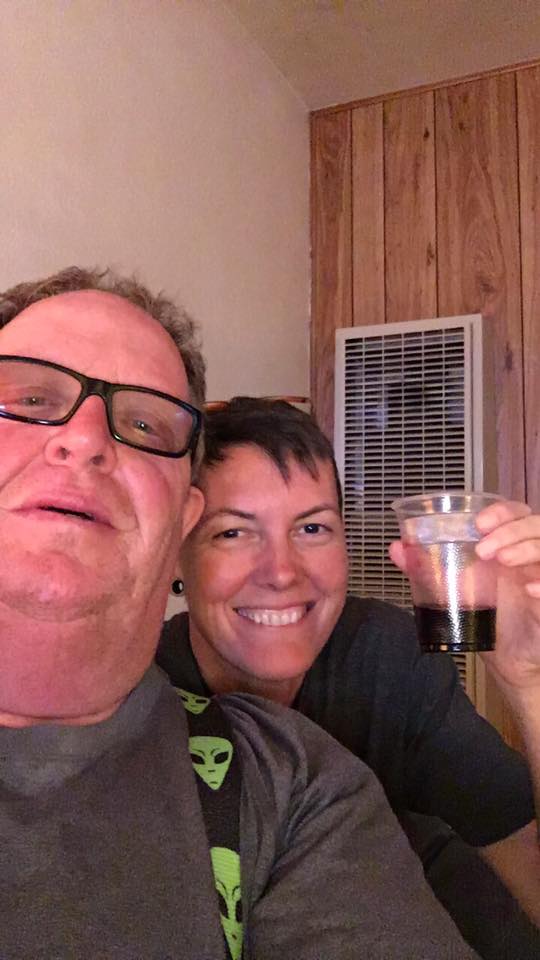 Relieved and happy (from left: Me, Brian and Aaron)

The next day we headed out to our next destination, Morro Bay.  The coastal route seemed to be the only place in California with sunny skies and no wind.  On the way we stopped at a Route 66 museum in the Mojave desert.  It was cute with a lot of cool artifacts and old photos of 66 and all the old desert towns that 66 ran through. 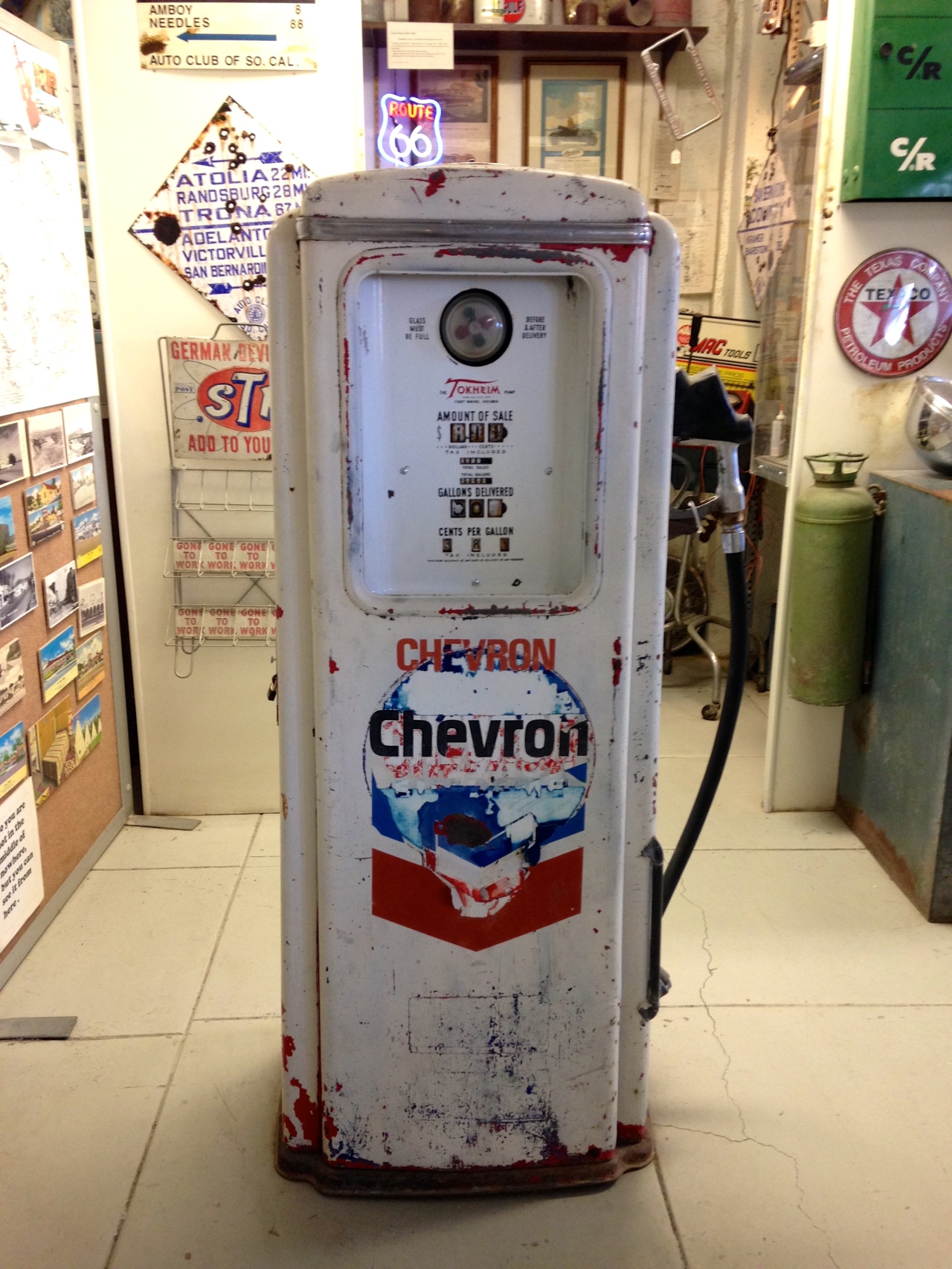 After this stop, we kept going and got on the most amazing road called Old Stage Coach road, that eventually put us out on Hwy 101.  What a motorcyclists dream!  This road was a 2-lane road out in the country that took us past green, rolling hills with yellow flowers blooming and…did I mention twisty roads?

It turns out there was a city-wide garage sale in Morro Bay so all campgrounds and hotels were booked.  There was one room left at Motel 6, so we took it and a few of us camped out on the floor.

The next morning, the guys took a more scenic route home, and I headed straight up Hwy 101 for my last 250 miles home to Oakland.  I arrived home with an odometer reading of 1,992 miles.

It was an amazing trip with breathtaking roads and scenery, peppered in with some excitement of the dust storm from holy hell.  I definitely learned some things, as I always do when traveling by bike.  My biggest take away?  If ever I see a sign that reads “low visibility” I’m going to believe it.

Thanks for following along on the journey.  Until the next one…*cheers*