Today was Day 3, and one of the days I was really looking forward to.  All small roads that promised gorgeous scenery through The Fort Apache Indian Reserve, and the White Mountains.  I let myself sleep a bit longer today since my mileage was lower (320 miles).  I packed up Gypsy a little quicker this time, getting down the routine now.  I checked my tires, chain, made sure bags were tight and then it was time to roll out.

The ride out of Sedona was gorgeous.  The roads were quiet and the sun was just starting to hit the red rocks.  I rode through town, and then continued on where the roads dipped and made sweeping turns all with the mountains as a backdrop.  I savored every moment of it and could not stop smiling. 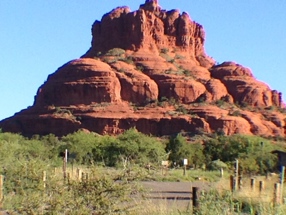 I continued on through the Coconino National Forest heading south, the views continued to be amazing for the whole trip.  I did pass a shooting range called the Jim Jones shooting range.  Hmmmm. I managed to continue on without taking a bullet.  I kept on heading south and the heat really started to kick in.  I had to stop and soak my cooling vest, and then I was ready to keep going.  I stopped at Globe, AZ, likely the hottest part and my most southern point.  After Globe, I picked up state route 60 and started heading up, then it started getting cooler again.  I passed through the Tonto National Forest and was treated to these views: 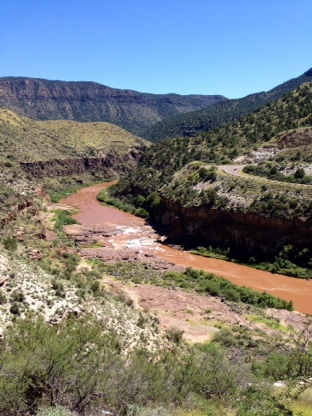 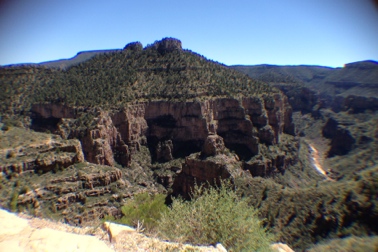 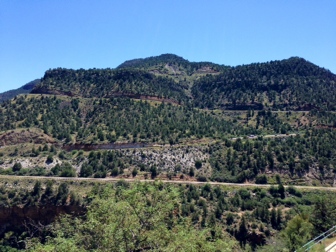 Lovely roads that wound around the mountains 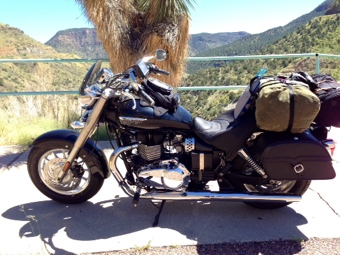 I continued on up to Show Low, an interesting and cute little town.  It almost reminds me of the south shore  of Tahoe.  Kind of touristy and a little artsy.  But not like, Santa Fe artsy.  I stopped for lunch and met a local cowboy who wanted to know where I was riding from.  We ended up talking for quite some time since he also rides.  He suggested a different route for me to take to Springerville.  He said not many people drive on it but it’s a great road to ride.  So I decided to take his advise and wow, I was not disappointed.  It was a 45 mile 2 way road that was lined with pine trees and daisies near the shoulder.  I was up to 7,000 feet so it was also nice and cool, almost chilly.  It was a great way to end my ride for the day.

I rolled into Springerville around 4 pm and was a little dismayed by this town and my hotel.  It reminded me of a run-down mid-west town but with a little more Wild West edge to it.  A saloon, The Dollar Store and a McDonalds.  Oh, and my hotel.  However, when I pulled in I saw 3 other motorcycles parked so I felt like I was in good company.  As soon as I parked a few of them came out to chat with me.  They were the nicest people and I liked them immediately.  My room was nice on the inside so now I started to feel a little better. 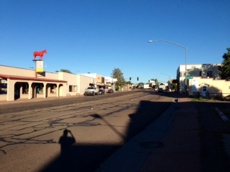 I felt like walking so I went in search of food.  I felt like everyone was driving ATV’s and wearing hunting clothes.  Then I walked past a taxidermy business.  “Dead on Taxidermy”.  They were inside working on some animals.  It was so….disturbing.  I continued on and could feel people staring at me as I walked into town.  I think I may have been the only one not wearing camouflage.  I got a small pizza and walked back to my room.  Normally I would eat at the restaurant but I was not feeling a friendly vibe in town.  When I got back to my hotel, I noticed the sun going down and it cast a nice light on the field with cows grazing (this one’s for you Jodi!).  This will be alright for tonight.  But I’ll be heading out early tomorrow, no doubt.  Looking foward to my next stop, Santa Fe! 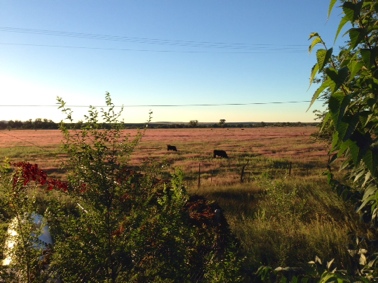