Today started out with blue skies and sunshine, no more rain in the forecast so I wanted to make the most of it. I found a scenic loop that included the South Rim of the Grand Canyon, then the Kaibab Nat’l Forest, the Coconino National Forest, and the Sunset Crater Volcano.  It was a scenic loop of pine trees, wild flowers and red rocks.  Approaching the Grand Canyon was exciting.  When I was about 20 miles out from the rim I could tell because the horizon got flat.  I don’t know how else to explain it, but almost like when you’re approaching the ocean but you can’t see it yet.  You know something is there because suddenly there are no trees, no mountains–just a flat horizon (so you’re either at the Grand Canyon, the ocean, or the midwest). 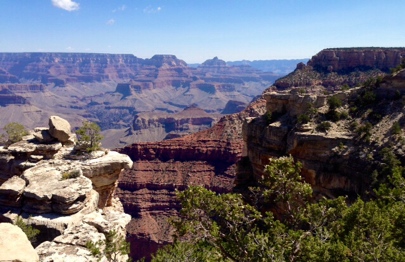 Lookout over the Grand Canyon

Selfie in the Grand Canyon!

I had to just stand and stare at it for some time.  It’s such an amazing place to be. I’m not sure I could ever get my fill of it, but after I captured as much as I could, I continued on down the loop on 64 East which runs along the south rim.  I could see it on my left side as I rode on by.  I continued on until I arrived at my next destination, the Sunset Crater Volcano. 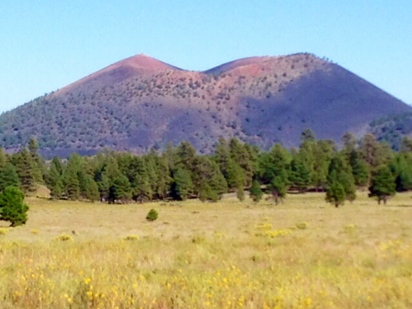 This place was pretty interesting.  The road in was 25 miles of gorgeous landscape.  Within the 25 miles I saw Ponderosa pines, scarlet wildflowers, lava beds, cinder cones, and desert landscape. 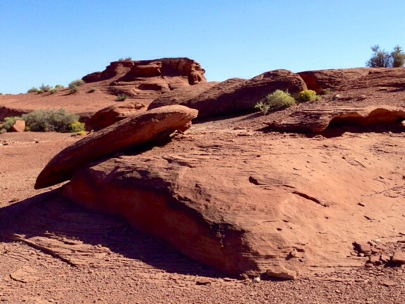 The end of the road brought me to the Wupatki Pueblo that is more than 700 years old.  They used sandstone slabs, lime-stone blocks, and chunks of basalt set with a clay-based mortar.  What remains of this pueblo had about 100 rooms and was multi-level. 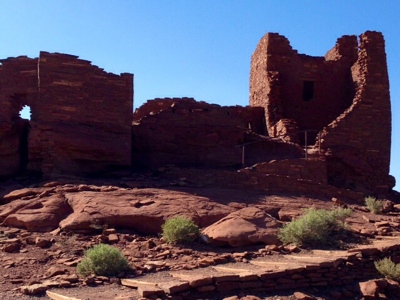 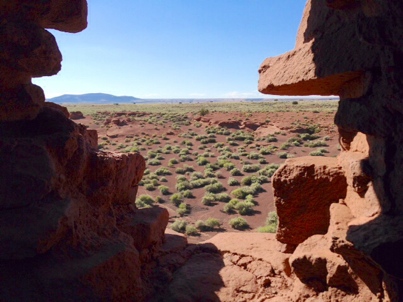 Looking out a window of the pueblo

As I left, I rolled down the scenic road of volcanic landscape imagining what it might have looked like 700 years ago.  I got back out to the main road on my loop and soon came upon a Navajo jewelry stand that was positioned on a scenic overlook.  I bought some goodies and snapped this photo. 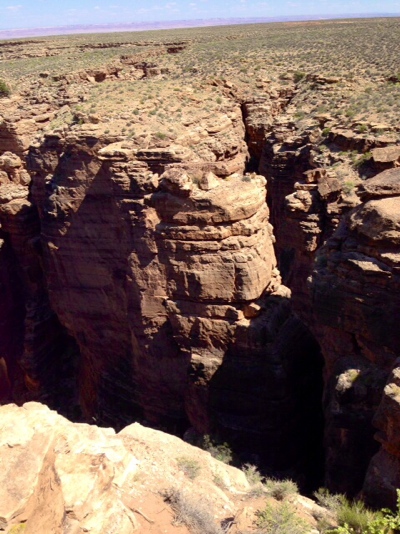 Another amazing day on back roads.  What started out to be 100 mile round trip jaunt to the Grand Canyon ended up being a 250-mile adventure.  Tomorrow I start the road back home.  I will go from Williams to Barstow.  It will be a nice ride up until Needles, then it’s pretty much a straight shot on in the interstate and we all know there won’t be much to see from Barstow back to Oakland but you never know, I might get surprised?