This morning on our walk to the favorite breakfast place (The Peace Tree), we had the warm sun shining on our faces and it looked to be the start of another great riding day.  The air was chilly (48 degrees) and today’s high would top out at 73 degrees, perfect for dirt riding.

Today we headed up Long Canyon Trail.  This trail is about 15 miles and goes up in elevation about 2,400 feet.  There were some amazing big views to be had.

We kept climbing up and ran into some pretty knarly rocky sections that were pretty tough.  We got to a certain point and saw a jeep ahead of us backing up to turn around.  Not a good sign.  We got through the tough rocky section, then Dick went on up ahead to scout out the path while I waited.  We came through this “tunnel” of a fallen rock, pretty cool!

Dick rode back down and decided to turn us around.  With the recent rains, there was a super steep slick rock section covered with wet sand that he could barely walk up, much less ride up so best to turn around and hit some other trails.  Even though we stopped short of the end, we still saw some stunning views.

We decided to go to Gemeni Bridges and Dead Horse Point via Schaefer Trail.  We rode on Schaefer trail Monday but after the rains it changed it a bit and made it even more fun.  I may have been guilty of riding along side Dick at the precise moment I went through a big mud puddle.  My bad!  A few shots from Schaefer Trail:

This shot is taken near the top of Schaefer.  It gives you an idea how high up wer are–notice the red Jeep in the lower left corner . 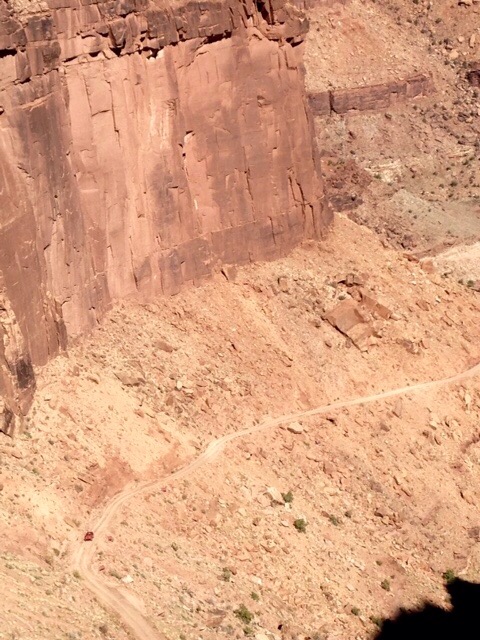 We rode all the way on Schaefer, over to Dead Horse Point State Park.  It has a magnificent overlook view of the Colorado River and Canyonlands NP.  According to legend, the ranchers would use the flat top Mesa as a horse corral by allowing the cliffs to serve as a natural fence.   Legend says that one time, some horses were left and died as a result of lack of water.   Some argue that but nevertheless, it’s how the park got its name.  The views were dizzying:

We decided to sit on the ledge here and have our lunch.  I couldn’t believe how quiet and still it was.  I expected being up that high we would experience more wind.  But when we sat there it was so still and two Ravens just glided silently over the canyon.

After lunch we continued on to Gemeni Bridges.  This trail was also a blast to ride, it had great vistas and the highlight is the spectacular twin arch, called Gemeni Bridges, on the rim of Bull Canyon. 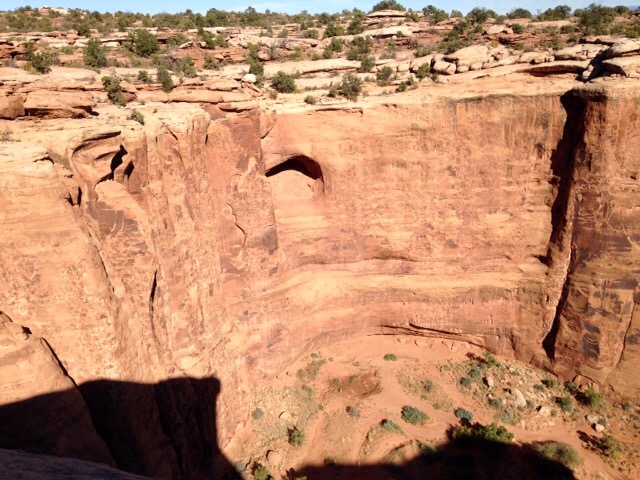 This was the last leg of our trip for the day.  We continued on Gemeni Bridges trail which ultimately brought us out to a paved road back to town.  Today’s ride had more technical challenges but it was fun!  I think you can see the tired on my face here for my last parting selfie of the day.  Tired, but happy!