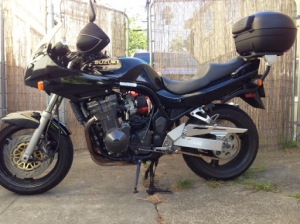 It was bittersweet when I listed the Bandit on eBay.  And when the new owner arrived to ride off in the sunset with her, I felt a little pang of sadness to see the Bandit ride away down the street, headed to it’s new home.

But, I had already started a whole new love affair with another.  It’s a style of bike I’ve never had before.  I was looking at different bikes for about 8 months prior–BMW’s, Triumphs, Suzuki’s, and Honda’s–and the Triumph America caught my eye.  I read up on it, compared it to other bikes, read the forums and decided it was time to test ride it.  I headed out to ACE Motorsports in Concord to see one for myself.  The last 2013 in the showroom, in my favorite color–just happened to be sitting there.  With a big yellow “sale” tag on it.  I compared the 2014’s and the 2013’s and the only difference was the 2014’s had a touring package which meant it came with bags, a windshield, and a sissy bar.  The motorcycle itself was the same.  The price difference was a couple thousand.  I figured I could buy my own bags for less than that and I didn’t want a windshield.  So, after quite some time of staring, oooo’ing and ahh’ing, I asked for the keys.

I rode it around for a short time, did some u-turns with it and that afternoon rode it home.  It takes getting used to as it is a whole different style of riding.  Feet more forward, lower to the ground and oh so comfortable.  I really love how stable it feels and with fuel injection, super smooth. Getting used to taking corners is different too.  Because it’s lower, you can’t lean as much or you’ll scrape your foot pegs, which I’ve done already my first day out.  But, it just takes a bit of tweaking to your technique and on my 3rd ride out I was already figuring that out.

So here’s to new adventures on my new ride.  Welcome to the family, America! More to come…