In Search of the Sierra Buttes Lookout Tower

Dick and I started out our adventure just 6 miles or so outside of Downieville, CA.  We were in search of the lookout tower on top of the Sierra Buttes.  This location is a few hours outside of Auburn so we trucked the bikes up and unloaded at Cal Ida National Park.  It’s a pretty little campground and I made note of it for future motorcycle camping excursions.

Dick unloaded the bikes while I supervised (for what it’s worth I was in the bathroom while he was unloading–really I was).  I made mention that all my Sherpa needed now was a coffee cup holder.  Of course, Dick obliged and had one ready and waiting.  Hmmmmm I wonder how THAT will work out on the gnarly uphills?

After getting all of our layers on for the expected high 40’s weather, we set off for the trail.  It was chilly at first, but that would all change once we hit the dirt.  The ride in was gorgeous.  The river rippling on my right, mountain tops, pine trees, and still a bit of color left on the leaves.  In California a common question is, “are you mountain person or an ocean person”?  While I do like the ocean, I am definitely a mountain girl. 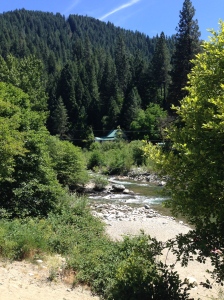 Once we started in we had the most perfect dirt trails.  Rolling and easy that went up, up, up.  Here was a spot where I waited for Dick to go check out “option B”, a fork in the trail.  All you could hear was the wind through the trees.  Beautiful. 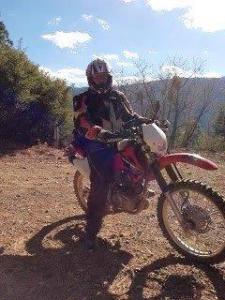 Really loving getting his picture taken. 🙂

As we made our way further up, it got gnarlier and steeper.  The Sherpa’s rear street tire was just not really set up for that kind of stuff and it was a little sketchy in some sections.  Dick and I traded bikes because as I mentioned before, he can ride pretty much anything on the rough stuff.  But there were a few sections he rode BOTH bikes through.  He’s a trooper!  For the record, I owe him the next 10 lunches.

We ended up having to turn around, since the map we had did not quite show where we wanted to be and although we probably could’ve found it, the sun was going down and WOW! It gets cold and dark FAST up there.  We did not want to be caught in the dark and cold.  However, two things came out of it.  A gorgeous adventure and the opportunity to go back (in the Spring or Summer) and find it!  Here’s to another great ride.  *Cheers*!